Cory Doctorow writes about the future as if it were today, as if it were about him and his buddies, and as if everything he invents were the most normal thing in the world despite being completely outrageous.* It makes you think, afterwards. The ideas in this novel, such as the end of death, living multiple lifetimes, choosing to “deadhead” for a while until the world changes, and so on, drop into your head like vanilla custard onto a nice, comfy warm pudding. It all seems quite plausible and entertaining. But then he brings up something which is truly old-school, hardline Psychology, and makes it sound annoyingly and disturbingly futuristic. That is his skill.

*Note, Nitpickers, the correct use of “if” and “were” in the previous paragraph for sentences in the subjunctive form.

I happily waded through Down & Out in the Magic Kingdom, which is set in a future version of Walt Disney World’s Magic Kingdom, and was even content to discover that there is an entire sub-culture, who proudly pronounce themselves “nerds”, who are dedicated to the enjoyment and preservation of theme and amusement parks.

But the motivations of the characters (not least of whom is the narrator, “Jules”/“Julian”), and their obsession with keeping The Magic Kingdom exactly as they had known it as children, turn violent. People start killing each other and there’s industrial espionage and betrayal on an industrial scale.

A future based on social likes

This far future world has one more odd thing, “Whuffie” which is your social standing rating, on which your entire life is based. You got no Whuffie, you got no access to anything, transport, medical care, accommodation, etc. And Whuffie is basically all the likes you get from people around you – how nice you are, how cool you are. You do something that they consider bad, you have no Whuffie and thus no credit. This is trial by social networking. It sounds like a future version of the Social Credit System developed by the Chinese government, intended to standardize the assessment of citizens’ and businesses’ economic and social reputation, or credit.

Bear in mind though, that Down and Out in the Magic Kingdom was originally published in 2003 – way, way before any of this stuff became “normalish”. For his time, Doctorow was truly visionary.

I read the reprinted May 2018 version, and to me it felt completely fresh and original.

Jules’ best pal is “Dan” who has loads of Whuffie because he is a “missionary” who converts communities that refuse to buy into the lifestyle of the “Bitchun Society” which rules the globe into people just like everyone else. In the Bitchun Society, you can live off-world, and have unlimited energy, unlimited supplies, the option of deadheading (going into hibernation for a few millennia), and of course no illness or death, because you can simply be rebooted from a previous version of yourself. As Dan explains:

“But for me, the real rough life is right here, on-world. The little enclaves, each one is like alternative history of humanity – what if we’d taken the Free Energy, but not deadheading? What if we’d taken deadheading, but only for the critically ill, not for people who didn’t want to be bored on long bus rides? Or no hyperlinks, no ad-hocracy, no Whuffie? Each one is different and wonderful.” (p.10-11)

Jules, being bored, between lifetimes, and somewhat let down by love, goes to his happy place, The Magic Kingdom in Walt Disney World (“Disney World”), Florida, US. On the credits page, it clearly states; “This novel is a work of fiction, set in an imagined future. All the characters and events portrayed in this book, including the imagined future of the Magic Kingdom, are either fictitious or are used fictitiously. The Walt Disney Company has not authorized or endorsed this novel.”

However, the Walt Disney Company could not have objected too much, because this novel is a love song to Disney World and The Magic Kingdom. It is soaked in admiration. It’s about people fighting to keep Disney World as it is, the way they remember it as children, the sense of belonging and all’s-right-with-the-world they had there. (And it’s about the science of managing queues, and about the second-by-second visitor experience, which I suspect is not fictitious at all but factual.)

Theme parks are just so pretty

Promotion of Halloween 2018 in the Liseberg Theme Park in Gothenburg, Sweden. 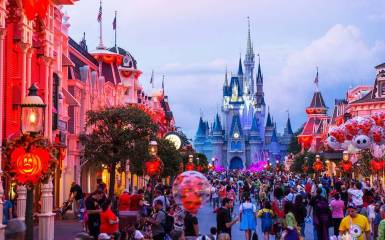 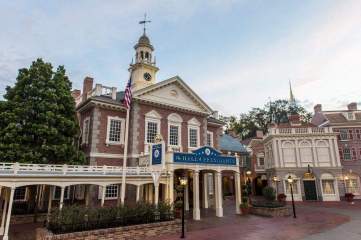 The Hall of the Presidents located in Liberty Square at the Magic Kingdom in the Walt Disney World Resort, near Orlando, Florida, USA. As if you didn’t know that already.

Jules and the engineers who keep the show on the road are particularly devoted to The Hall of Presidents in Liberty Square at the Magic Kingdom. They have modernized the stage show which features figures of all the United States Presidents – a favourite being Abraham Lincoln – with the latest technologies, but, in essence, it is as Jules and his generation(s) remember it. Then a new crowd comes in and want to do unorthodox upgrades to the Hall of Presidents. In the meantime, Jules has technically been shot dead (yep, dead), but for sentimental reasons does not want to be rebooted or upgraded, and his Whuffie sinks to zero.

“This how you hit bottom in Walt Disney World, in a hotel with the hissing of the monorail and the sun streaming through the window, the hooting of the steam engines on the railroad and the distant howl of the recorded wolves at the Haunted Mansion. The world drops away from you, recedes until you’re nothing but a speck, a mote in blackness.” (p.188)

By instantly bringing up classical images of Disney World in the minds of readers of many generations, merely through the title and setting of the book, Doctorow creates an instantaneous connection, but also immediate tension.

This Disney World is of the future, it is only in part what we, the readers of 2003 until today, remember. This tension and duality is quite stressful to the reader, and it is the same stress one feels when nostalgia for things from your past causes you to revisit them. Often there is disappointment, sadness and rejection. Memories are rarely accurate and over time become less so. And the world changes, and we move on. The moment that you try to grasp your past, the things you felt were your world, you will most certainly be disillusioned. This is what the main character, Jules, goes through when his favourite happy place is under attack, but the same goes for the other characters, the “ad-hocs” who, frantically and without compensation, work to keep the park as it is. They may well be crowd-sourced mobs, but they have the passion of brainwashed armies.

It is a classic theme and well depicted. Jules, his girlfriend “Lil”, his ex-wife “Zed” and his pal Dan, despite living in a world where there is no death, go through the stages of mourning for the park but also for all their previous lives and all the people they have known who have deadheaded.

The novel was a pleasure to read, and Doctorow again proves that he is in complete command of his genre. The only thing that bothered me was the illustration at the headers of the chapters. What in heaven’s name is that? I can see a power plug, but what is that thing with the two dots?If you are going to use graphics, they should be hi-res enough to be recognizable.

About the author and digital rights

Cory Doctorow was born in Canada and isn’t that lovely? (This might explain why the characters “Jules” and “Dan” bond on the campus of the University of Toronto, of all places.) His latest novel is Walkaway, published in 2017, which I’ll read next. With Charles Stross he co-authored The Rapture of the Nerds. His website craphound.com, is fantastic. You can read all about him there.

Doctorow campaigns for the eradication of digital rights management (DRM). He claims that it limits the free sharing of digital media and frequently causes problems for legitimate users (including registration problems that lock users out of their own purchases and prevent them from being able to move their media to other devices). Down and Out in the Magic Kingdom was the first novel released under one of the Creative Commons licences, allowing readers to circulate the electronic edition as long as they neither made money from it nor used it to create derived works. The electronic edition was released simultaneously with the print edition. In March 2003, it was re-released with a different Creative Commons licence that allowed derivative works such as fan fiction, but still prohibited commercial usage. So this book, with all its references to Disney World, is a statement of digital freedom.

That lovely blue lake is in fact a screen shot from a Skyline webcam focused on the Walchensee in Germany, with a view to Herzogstand and Jochberg. The lake gets the most glorious colours since most of the time the water is dead calm. I added some unlikely planets in the sky and the Disney World castle. I confess to habitually watching scenic webcams, a result, no doubt, of my nostalgia (ha! see?) for places I have lived and visited.