On the subject of fictional worlds: I’d like to introduce you to “Rebusfontein”. Rebusfontein (pronounced rhéá-booz-fonteyn) is an Afrikaans name meaning Rebus Fountain. In South Africa, which is partly semi-arid, many inland place names end in words that have to do with water – fountain, dam, river, stream, etc. A rebus is a word and picture puzzle. So, when reading about the town where one of the followers of this blog, “Tannie Frannie” (Auntie Frannie), lives, I should have known that there’s something different about Rebusfontein.

When a recent post from Auntie Frannie referred to an event that seemed highly unlikely, I checked and discovered that Rebusfontein does not exist, other than on the Internet. The catch is that Rebusfontein is said to be the home town of many different people who each write about it on their blogs and reference a kind of common abstract construct. I can only guess what this place is like from their accounts – Rebusfontein sounds like a quiet, quaint, artsy, rural town which is like the historical villages Matjiesfontein, Jagersfontein or Barberton in South Africa. 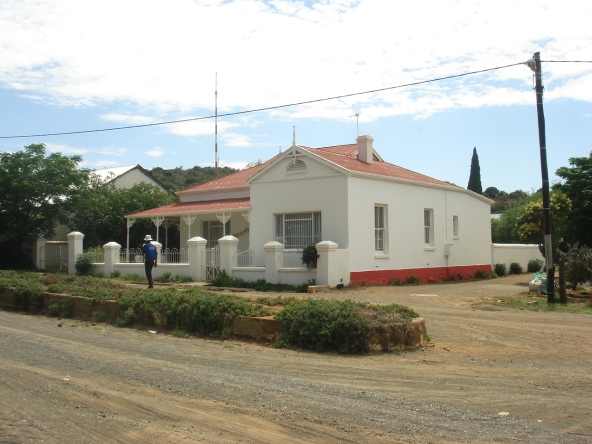 Rebusfontein is a place where many South Africans might like to live since it is quite idyllic. Recently, the bloggers wrote about Barnum’s Circus coming to town and one of the inhabitants being part of the show for her spectacularly long leg hair. It’s called “Una Goes to the Circus”.

These people are not online gamers who spend their days in fantasy kingdoms and adopt different avatars to live out their adventures in virtual worlds. They are adults who seem to delight in this singular insider joke they have created. They reveal their real identities online, some more obscured than others, but the place where they say they live isn’t real.

Is Rebusfontein a running in-joke? No, not all of it. It is also a writing challenge. The story about “Una” and her indestructible leg hair is part of a challenge to write stories in Afrikaans, called “Lay Your Egg”, set by one of this circle of bloggers. Different bloggers embroider stories about Rebusfontein, the latest being “Problems at the Festive Table at Rebusfontein”.

They each add on bits of the story in the same decidedly quirky style. The challenge has been going for about two years, but the bloggers write about Rebusfontein outside of the challenge as well. It is in such idiomatic, informal and humorous Afrikaans that I have not attempted to translate it. Too many words do not have an English equivalent.

But I figure, if they keep going this way, they are going to to end up with book of stories about Rebusfontein, like an Afrikaans version of Night Vale. I wonder who came up with the idea first? And I wonder why they keep doing it and how long it will last? And I wonder if they personally know each other?

The literary term for this activity, carried out by more than three people, is Collaborative Storytelling, also known as books by Fiction Writing Collectives, Collaborative Writing or Folding Stories Creation. It’s actually an old practice, dating back to the Renaissance. Thanks to interlinked blogs and platforms, and online gaming, collaborative fiction, which used to be only possible through successive printed works or sequels, is now possible for all budding writers who are online.

The Rebusfontein friends host theirs on their own blogs and the story thread on a site called Fresh.inlinkz, but there are other platforms that come and go. It is unfortunate that author rights are always problematic with collaborative fiction, and it is almost impossible to make money off online stories (take the plaforms Protagonize and Ficly, both of which are still online but have, after many years, closed down for new contributions).

One of the most famous works of collective fiction is A Million Penguins, hosted by Penguin  Books and De Montford University, which closed down in 2007 after 1030 pages had been created, nearly 1500 individuals contributed to the writing and editing, 75000 people visited the site and it had more than 280,000 page views (which for 2007 is amazing). You can read it here – be patient, this stuff is more than ten years old and sitting in an archive. The link to the printable version is dead – but seriously, it is very strange to read. It never made it into print, but there is a massive research report about it.

The trick is to create a seamless narrative, in which the settings, characters and writing style are consistent despite being by different authors. And this particular creation, Rebusfontein, is. How that happened, with disparate people, who knows?

A collaboration of writers

The characters in this story (the bloggers) have names as strange as the place: “Bondels”, meaning bundles; “Una” of course; “Kameel” (camel), “Toortsie” (untranslatable) and “Broodina” (something like female loaf of bread). I was almost grateful that not many people would discover Rebusfontein because it is unapologetically subversive. At the recent benighted festive table, South African celebrity, Nataniël, caused Kim Kardashian’s bum to deflate. And there was the incident with Henry VIII and his little cleaver. And Hitler’s dog. Say no more, nudge nudge.

For these people, all talented writers, their Rebusfontein may turn into a proper fictional world if they keep it up. Reading about it, for a moment I found myself wishing to visit there, it sounded so real.

15 comments on “What is it about Rebusfontein and King Louis VIII?”