After Twin Peaks, Twin Peaks: The Return premiered on the 21st of May, I wondered why do we identify with fictional characters and think they are real – or want to believe they are real?  Here goes reason #8 – which is the most difficult to figure out.

The last explanation for our thinking that fictional characters are real, is our human ability to empathize. The ability to identify emotionally, or to feel the emotions of, fictional characters, is because of our human ability to empathize. There are two main types of empathy, affective, to do with emotions, and cognitive, to do with thinking. Affective or emotional empathy is the capacity to respond with an appropriate emotion to another’s mental states. So, you read and visualize about someone being depressed – result, you feel sad. You see someone being rejected in a film and they cry – result, you cry too. The better the depiction, the more you feel. When you feel affective empathy, you can feel sympathy and compassion (makes you say “I’m sorry…”) for others in response to their suffering. Or you can actually feel personal distress if you personally feel the pain in response to someone else’s suffering.

Cognitive empathy, on the other hand, is a different kettle of fish altogether.

There is probably no one spot in the brain where empathetic emotions and actions are generated. However, there are associated areas. The issue here is not the simple decoding of sensory processing. The issue is the mirroring or outputs from sensory processing. Sensory processing in the brain involves multiple sensory modality inputs, such as proprioception (movement, position), vision, auditory system, tactile (touch), olfactory (smell), vestibular system, interoception, and taste, into usable functional outputs. Inputs from different sensory organs are processed in different areas in the brain but these are functionally integrated so that we can use multiple inputs to perceive what our bodies sense about our environment. Multisensory integration is necessary for almost every activity that we perform. 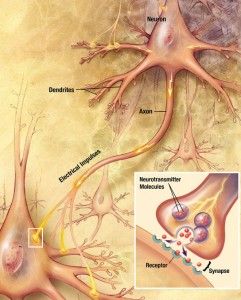 The graphic above shows the chemical synapse scheme of the neurons (brain cells) in the brain. Neurons generate electrical signals that travel along their axons. When a pulse of electricity reaches a junction called a synapse, it causes a neurotransmitter chemical to be released, which binds to receptors on other cells and thereby alters their electrical activity. (Image: US National Institutes of Health, National Institute on Aging, source: Wikimedia, public domain image Rtrvd. 2017-05-25)

The sensory (from Latin sensus ‘faculty of feeling, thought, meaning’) nervous system consists of neurons and neural pathways that responds to the senses. The mirror neuron system is a group of specialized neurons that are said to “mirror” the actions and behaviour of other neurons. The mirror neuron system is involved in the brain functions of social cognition, language, empathy, theory of mind and neuropsychiatric disorders. Some researchers in Cognitive Neuroscience and Cognitive Psychology argue that mirror neurons may be important for understanding the actions of other people, and for learning new skills by imitation. Some researchers relate mirror neurons to language abilities.

The image above shows the lobes of the brain. The four brain lobes are the frontal lobe (red), parietal lobe (orange), temporal lobe (green), occipital lobe (yellow), and insula (purple) is also shown. Others are: the brain stem (black) and the cerebellum (sky blue). (Polygon data is from BodyParts 3D, generated by and maintained by Database Center for Life Science (DBCLS). Creative Commons licence: CC BY-SA 2.1 jp, Source: Wikimedia, Rtrvd. 2017-05-25)

The full function of the mirror neuron system has not been confirmed at this time, though studies of people with disorders like autism, and experiments on primates, have added to the understanding of where and what mirror neurons are.

Neuroscientists like Marco Iacoboni (UCLA) have argued that mirror neurons are the neural basis of the human capacity for emotions such as empathy.

“The way mirror neurons likely let us understand others is by providing some kind of inner imitation of the actions of other people, which in turn leads us to “simulate” the intentions and emotions associated with those actions. When I see you smiling, my mirror neurons for smiling fire up, too, initiating a cascade of neural activity that evokes the feeling we typically associate with a smile.”

(Marco Iacoboni, author of Mirroring People: The Science of Empathy and How We Connect With Others, interviewed by Jonah Lehrer, in The Mirror Neuron Revolution: Explaining What Makes Humans Social, Scientific American, rtrvd. 2017-05-25)

Studies on mirror neurons are continuing. A study published in April 2010 (by Roy Mukamel, Arne D. Ekstrom and others, in Current Biology, Volume 20, Issue 8, p.750–756, 27 April 2010) states that recordings could be made from single neurons with mirror properties, in significant proportions, that located in a specific area of the human brain, namely the Smedial frontal lobe (SMA) and in medial temporal lobe of the brain.

“Before the discovery of mirror neurons, scientists generally believed that our brains use logical thought processes to interpret and predict other people’s actions. Now, however, many have come to believe that we understand others not by thinking, but by feeling. For mirror neurons appear to let us “simulate” not just other people’s actions, but the intentions and emotions behind those actions.

The mirror neuron system also appears to allow us to decode (receive and interpret) facial expressions, since the same regions of the brain are activated whether expressions are observed or made. Therefore, the mirror neuron system plays a  role in our ability to empathize and socialize with others, since we communicate our emotions mostly through facial expressions. We react to external stimuli, regardless of what we react to is real or not.

The graphic above shows the processing of one type of sensory input: sound. It goes from the ear, to the brain stem, through the brain during which it is decoded, to the auditory cortex in the temporal lobe, where it is processed and given meaning. (Image: Zina Deretsky, National Science Foundation, source: Wikipedia, public domain image Rtrvd. 2017-05-25)

“On a neurobiological level, our experience of consuming fiction is actually very real. Measurably so. When we read about the scent of coffee, for instance, the olfactory center of our brain lights up. We can’t really smell it, but we’re familiar with the scent and we can conjure it up. Especially if the language is rich and helps us recreate the experience. Metaphors can be helpful in giving us a vibrant, multi-sensory experience when we’re reading, similes help a wider range of readers experience the same emotion, based on our own internal experiences.”

(Abby Norman, The Psychology of Fandom: Why We Get Attached to Fictional Characters, August 19th, 2015, in themarysue.com)

Conclusion: Sensory input from a picture, a book or a film can automatically be mirrored by specific neurons in our brains in reaction to specific sensory stimuli, allowing us to simulate others’ behaviours, in other words, to respond empathetically. This creates the illusion that we are connected to a fictional character, that they are like us, and that we share their feelings. And that is as much sense as I can make of it.