I did not like Backman’s previous novel, A Man Called Ove, but was spurred on to buy book no.3, Britt-Marie Was Here, by a very insistent salesperson in the Chapters bookstore, who had been so entranced by it that she was practically hugging her own copy. I bought it against my better judgment and I was underwhelmed all over again, despite trying my best to be objective. When Backman writes, he repeats certain words and phrases over and over, and makes each chapter and paragraph follow the same basic pattern, so that it sounds almost like a children’s rhyme, a medieval poem, or a traditional fairytale. The novel is nice but light-weight, like a pretty balloon. Because I do not agree with people categorizing a frothy piece of writing like this one as a literary masterpiece, I will, below, debunk the myth. In any case, when I see the words “international bestseller”, particularly “New York Times International Bestseller”, on a book’s cover I am immediately suspicious. The NYT bestsellers list is compiled by the editors of the “News Surveys” department, not by The New York Times Book Review department, where it is published. It is based on weekly sales reports obtained from selected samples of independent and chain bookstores and wholesalers throughout the United States. If you look at the books on the bestsellers list at any moment, you will see that quality of writing or concept is not the criteria. At March 26, 2017, Backman’s first novel, A Man called Ove, was still on the list at No.5. A novel by Danielle Steel was at No.3. Q.E.D.

Here’s a reminder of what a fairy tale is, and in which style it is usually written.

“Almost all fairy tales have the same patterns in plot, the same way of stringing together sequences of action in the narrative. Most tales begin with a disturbance that leads to the fracturing of the nuclear family, an evil act or villainy, or alternately a wish or lack that must be fulfilled. Through encounters with helper figures, journeys to other places, tasks completed, obstacles navigated, and villains defeated, the protagonists emerge as competent adults who marry and rule. Plot episodes may be repeated, usually three times, as three is the “magic number” in Indo-European culture groups….Fairy tales have a distinctive style that tends toward simplicity and abstraction (Swiss folklorist Max Luthi has written extensively on this topic). In English we recognize many linguistic markers of fairy tales: once upon a time, happily ever after, as golden as the sun, and so on. Fairy tales speak in metaphors, and as such, their language tends to favor extremes (not just black, but black as a raven’s feather), symmetry, and synecdoche. (A good analysis by Jeana Jorgensen on the Patheos blog.) 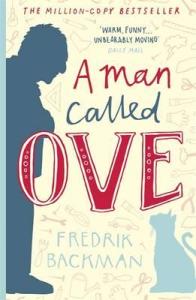 I suspect Britt-Marie Was Here is popular for three reasons: 1) Hygge is the In Thing. Everything warm, cuddly and Scandinavian is hot and has been for the past year. 2) The setting and the people are different from the usual North American and South European settings. 3) The patterned writing is soothing and easy to read, the effect being the same as reciting a fairy tale to children – you get all warm and fuzzy and nod off.

Backman treats his subject very lightly indeed. The characters are stereotypes in both books I’ve read: An old man and woman who are set in their ways and anti-social, almost to the point of being on the Autism spectrum, meet various people who are completely different, who force them to engage with the world, and it all ends happily, implausibly and ridiculously easily.

Patterns and sets of three

It is a pain to be able to tick off all the linguistic markers of fairy tales that Backman has again used in this novel. Unfortunately, it is a transparent technique and not very cleverly applied. If you want a play on, or even an adult version of this genre, read  The Table of Less Valued Knights, by Marie Phillips or Squirrel Seeks Chipmunk by David Sedaris. At best I was soothed into a sort of bedtime calm by reading the chapters, each of which went more or less the same:

She does not sleep a lot of the time, and she should’ve been off her head from lack of sleep, rather than trying to reform the town of Borg.

There is nothing wrong with writing simply, concisely and crisply. Done well, such writing is elegant, focused and meaningful, as writers like Sjón and even Gerard Reve demonstrate. However, it is the lack of depth in the novel, particularly in the central theme (life is like a football game, or like balcony flowers) that made me think it is just not good enough. There is one violent death in the novel, but it failed to move me.

The novel is pleasant, light reading, cheering, one way to pass the time. But there many other novels on the same subject that are deserving of the same praise, and that are better. So, if you want a book which may lull you but not stimulate your mind, read it by all means. If you expect better from this author, wait until his next book. Considering that A Man Called Ove has already been made into a film, Backman has mastered the recipe of writing popular fiction and there will be more by him.

There was one incident, where Britt-Marie talks about the fact that she and Kent loved each other in the beginning of their marriage, which Backman describes more sensitively than elsewhere. However, even here you can see the typical way in which he writes:

“She knows that once upon a time he did care. That was back in the days when he still looked at her as if he knew she was there. It’s difficult to know when love blooms; suddenly one day you wake up and it’s in full flower. It works the same way when it wilts – one day it’s just too late. Love has a great deal in common with balcony plants in that way. Sometimes not even bicarbonate of soda makes a difference.” (p.40)

Also in mitigation, at least Britt-Marie rides off into the sunset on her own, and does not, as expected in a romantic ending, shack up with either her ex or the plump but well-meaning policeman.

Comparison to the form of the fairy tale

Here is what makes this novel very like a fairy tale. There are actually too many examples to mention. I know that every author has their pet phrases but it is just ridiculous to make characters so extremely limited and one-dimensional. Let’s just say that this novel does not stand up to deep scrutiny. Taking it apart exposes the weaknesses.