The past few years have seen an increase in films and novels that rework and modernise classical fairytales and folklore. These include:

Fairytales is a sub genre of folklore, age-old moralistic tales, with magic added. The increasing number of them makes me think that writers are running out of ideas – or perhaps the comfortingly familiar tales with their easy, magical solutions are what people want in today’s world – children’s books for grown-ups is all they can stomach. This trend can also be seen in publishing, with a large number of novels in the format of updated folk tales, or modern adaptations of fairy tales.  Here are two modern takes on classic folk tales that have sold very well.  To my mind, neither one is a memorable addition to the genre, but both were enjoyable reads while they lasted. Basically, they are lightweight fodder, not a fraction of the dark and chilling original fables from which they sprang.

The 100-Year-Old Man Who Climbed out the Window and Disappeared, by Jonas Jonasson

This seemed to be a good idea for a novel, an old-age-pensioner version of “Forrest Gump”. It was mildly funny and entertaining at first, but after the so-manyeth incident where the old man and his companions almost get into trouble but then get saved by some amazing coincidence, it becomes predictable. It is basically a modern version of a folkloristic quest tale.

“Allan Karlsson”, the 100-year-old man of the title, meets a number of oddball characters on his quest to get out of the old-age home in which he has ended up, and recalls the quests on which he embarked throughout his life. In folklore and fairytales, a quest, a journey towards a goal, serves as a plot device and also as a symbol. If there is a message in this novel it is that old people can still give the finger to society that wants to coop them up and shut them up, and Karlsson’s flight from the old age home is a symbol for his flight from being one of the living dead in the home, bored out of his mind: “…he thought that he had probably been mistaken when he’s sat in the Old Folks’ home, feeling as if he might as well be dead. However many aches and pains he suffered, it had to be much more interesting and instructive to be on the run from Director Alice than to be lying six feet under.” (p. 4).

The features of quests in fables

Quests appear in the folklore of every nation – and in Sweden, where the author comes from and the story begins, there has been a recent resurgence of producing literature in the folkloristic tradition, rather than literature heavy with political debate or social criticism, though there is some social criticism in this novel. Quest fables – like any other fable – have set features or trademarks. To compare, briefly:

And so on. All the other elements of the classical quest folktale are there: reconnaissance, trickery, complicity, mediation by the hero, a magical agent (in this case, Karlsson’s magical ability to make bombs and remain unperturbed), pursuit, rescue, difficult tasks, recognition/reward. Add to this the simple language (short, simple, choppy sentences, many starting with “and”, “but”, “now” and “yes/no”), and simplistic resolutions, it was pretty formulaic and ultimately, not that memorable.

But to prove that these children’s stories for adults fall into the taste of large numbers of modern readers; The Hundred-Year-Old Man Who Climbed Out the Window and Disappeared was released as hardback and audiobook in 2009, and as paperback in 2010, became the best selling book for advanced children in Sweden in 2010 (told you so!) and by July 2012 had sold three million copies world wide. The audiobook, read by the actor Björn Granath, won the Iris Ljudbokspris award in 2010. In 2013, the film of the book was released.

Very plainly in the genre of folklore, this collection of cautionary tales contains modern versions of the medieval bestiary. A bestiary is a compendium of stories about animals, birds and sometimes plants. Originating in the ancient world, bestiaries were made popular in the Middle Ages in illustrated volumes containing each animal’s natural history, an illustration of it and an accompanying moral lesson (like The Tortoise and The Hare – slow and steady progress will win, or The Ant and The Grasshopper – hard work is better than idleness).

The animal fables of La Fontaine

One of the stories in Sedaris’ collection refers to the French writer of fables, Jean de La Fontaine (8 July 1621 – 13 April 1695). His famous collection, The Fables of De La Fontaine, was published from 1668 to 1694 in 12 volumes, and contains 239 fables, some adapted from the classical fabulists (writers of fables) Aesop, Babrius and Phaedrus. In the later books, he recognises the contribution of the Indian writer of fables, Bidpai (Pilpay), whose fables, produced in the French through translations from Persian, date back to the Indian Panchatantra. Fontaine drew on many other sources and French writers, and none of the fables in the collection are of his own invention. His fables are known for their wit, artlessness and insight into the peculiarities of human nature.

Along with other fables, such as those by Aesop, his fables have become integrated into children’s literature and into common usage through idioms and metaphors. They include: The Ant and the Grasshopper (La cigale et la fourmi), The Goose that Laid the Golden Eggs (La Poule aux oeufs d’or), The Tortoise and the Hare (Le lièvre et la torte), The Town Mouse and the Country Mouse (Le rat de ville et le rat des champs), and The wolf who played shepherd/wolf in sheep’s clothing (Le loup devenu berger).

So Sedaris is walking in the footsteps of giants with this slim volume. Without the sometimes gruesome, but always entertaining, illustrations – as befits a bestiary – by Ian Falconer (the creator of the Olivia children’s books), it would’ve been far less enjoyable. There are 16 fables based on the difficulties of modern life and the lessons that go with them. “The Squirrel and the Chipmunk” – the story of the book’s title – is about modern dating, and the lessons are: If you’ve got nothing in common you’ve got nothing in common – no use trying to fake it. Also, don’t pretend to know something when you don’t. In this case, the squirrel knew nothing about jazz. Many people know nothing about jazz and don’t particularly like it, but would not say so for fear or looking like philistines. 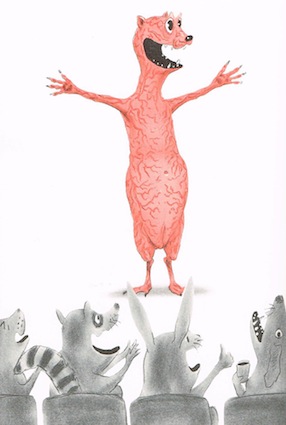 Often the stories illustrate that stupidity, vanity, pretentiousness, naïveté and greed will lead you to a bad end, justifiably so. Many of the stories are violent and contain sexual references – making this most certainly fables for adults, not children – like the crow that pecks out the lamb’s eyes while its mother is practicing meditation, after having borrowed the mantra of the crow, “the code of thieves and charlatans and those who are good to themselves the world over: ‘I have to do what I have to do…’”

Sophisticated, well observed and a bit subversive, the collection does provide food for thought, though I often trotted through the stories at speed just to get to Sedaris’ clever and nicely put closing lines.