A while back I discovered the high-quality live cams in one of my favourite places in the world, the Austrian ski resort of Fiss. They have eight live cams at various spots around the huge ski area of Serfaus-Fiss-Ladis in the south-eastern Tirol. In winter, I saw the snow white-out the lenses of the cameras, the flakes clinging as the cameras moved and zoomed. I saw the tiny black figures of the skiers, like swarms of ants, make their way down the slopes. Then the snow changed to sleet, and then to rain, and one day, the cameras switched from the slopes to the valley, and the green grass took over.

How it looks on-screen.

1. The image that got my attention: A cold moon over snow-covered peaks.

3. Still cold all over by February.

4. March – and there are clouds and signs of rain.

It’s one thing to know seasons change. It’s another thing to see the slow transformation thousands of miles away in another country. From Alpenglühn on the white-ridged peaks we went to pastel sunsets and sunrises, and kaleidoscopes of sunbeams and glitter-edged clouds. (Above and below are some of the scenes I enjoyed. I had to photoshop out the cursors and text off the screenshots – as you can see on the first image, above.)

5. March, and the snow remains high up, with green grass emerging at valley level.

6. April, and the last snow remnants are reflected in the lake.

7. May – A gorgeous sunrise and a pristine mirror-image. 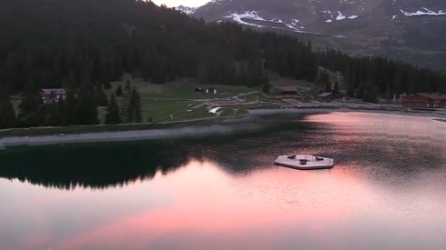 Through these webcams, I am as connected to the place as I can be without actually being there in person. I watch the sun come up, and the ski lift cabins start to move, the umbrellas being unfurled, the little boats gliding over the lakes. In winter, I will see my favourite views again, down the slopes that I used to love, and at the bottom, my most favourite little village, Fiss.

10. June, and the sunrise lights the heather on the upper slopes.

11. July, and a spider’s web across the camera lens is lit up light a necklace.

14. All summer and green. Not a drop of snow to be seen anywhere.