It’s the 450th anniversary of the birth of William Shakespeare, who is traditionally believed to have been born today, 23 April, in 1564 in Stratford-upon-Avon, Warwickshire, England. So long ago, yet all over the world English speakers still use his words as normal expressions, still read his plays and poetry and still produce and enjoy adaptations and updates of his works in different media. And I can add to that: They do it a lot!

If you’re anything like me, a normal, somewhat lazy student, I got to know most of Shakespeare’s plays through the “Classics Illustrated” comic book range published by the Gilberton Company, Inc. The publishing company began as  an imprint of the Elliot Publishing Company, became independent in 1942, and was sold to the Frawley Corporation in 1967. Russian-born publisher Albert Lewis Kanter (1897–1973) created Classic Comics for Elliot in 1941.

Its first issues were The Three Musketeers and The Count of Monte Cristo by  Alexandre Dumas, and Ivanhoe by Sir Walter Scott. Recognizing the appeal of early comic books, introduced to the USA in 1933, Kanter believed he could use the new format to introduce young and reluctant readers to “great literature”.  The company ceased publishing in 1971, but many other companies took over the concept and added titles to the line, including publishers Gilberton, Marvel Illustrated, PAICO Classics, Pendulum Press  and Self Made Hero.  Well, Kantor was right, and that’s how I first got to know Julius Caesar, A Midsummer Night’s Dream, Hamlet, Macbeth, and Romeo and Juliet.

I still have those copies, now read to rags. Knowing now the complexity and depth of Shakespeare’s work, Gilbertson and its successors did a surprisingly good job of condensing the text and maintaining some historical accuracy in the illustrations. I felt myself familiar with these plays by the time I studied them at university. 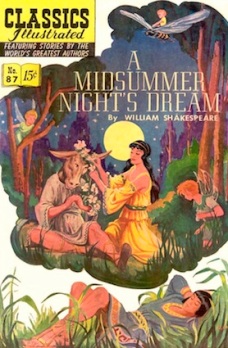 A Midsummer Night’s Dream – Just look at how little they cost; 10 cents or 15 cents 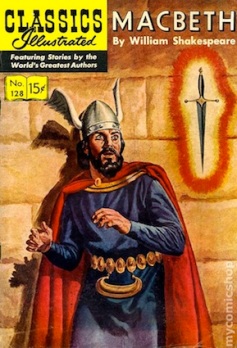 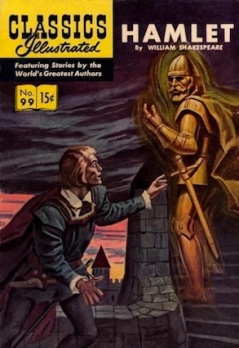 Julius Caesar – Mark Antony gives a speech over Caesar’s corpse—beginning with the much-quoted “Friends, Romans, countrymen, lend me your ears”

Inside page of Classics Illustrated Macbeth

Shakespeare’s works, through comics like these and thousands of other variations, are part of both historical and modern English literature.  Modern – certainly, even sung by today’s bands. Here’s the lyrics of “Juliet” by Hanson. They might be yummy and blonde, and best known for the bubblelicious Mmm-Bop, but they know how to borrow from Shakespeare.

Juliet, you’re my love I know it’s true
Around you I don’t know what to do
Can’t you see that you’re my sun and moon
Juliet, once upon a time is not enough
Don’t you know that I’m a man in love
And I can’t get enough of you

Your window breaks the rising sun
By any other name, you’re still so beautiful

[Shakespeare wrote, Act II, Scene 1:
But, soft! what light through yonder window breaks?
It is the east, and Juliet is the sun.
Act II, Scene 2:
What’s in a name? that which we call a rose
By any other name would smell as sweet;]

In everything I do, I will love you my whole life
If you’ll be my, be my Juliet

Juliet, every single time you get me all messed up
I try to talk it out
But you’re so hot to touch
And Juliet, I feel so dangerous
Looking in your eyes is perilous
But I don’t care ‘cause I would die for love

Juliet, you are a drug and it is quick

And with a kiss I lose my senses
Juliet, you are a fire, I am consumed
Tonight I’m dying in your arms

[Shakespeare wrote, Act II, Scene IV:
These violent delights have violent ends
And in their triumph die, like fire and powder,
Which as they kiss consume:]

AND MY PERSONAL FAVOURITE?

Shall I compare thee to a summer’s day? (Sonnet 18)

Shall I compare thee to a summer’s day?
Thou art more lovely and more temperate.
Rough winds do shake the darling buds of May,
And summer’s lease hath all too short a date.
Sometime too hot the eye of heaven shines,
And often is his gold complexion dimmed;
And every fair from fair sometime declines,
By chance, or nature’s changing course, untrimmed;
But thy eternal summer shall not fade,
Nor lose possession of that fair thou ow’st,
Nor shall death brag thou wand’rest in his shade,
When in eternal lines to Time thou grow’st.
So long as men can breathe, or eyes can see,
So long lives this, and this gives life to thee.

If that isn’t just gorgeous, I don’t know what is.

THE BARD  IS DEAD – LONG LIVE THE BARD!

As Shakespeare’s works remain interesting and challenging, and they continue to be read, there has been many adaptations of his plays, including, in the past two years: 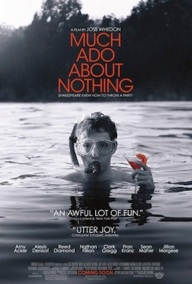