The Swedish crime writer Henning Mankell (born February 3, 1948) died of cancer on 5 October 2015. His most famous creation was “Inspector Kurt Wallander”, who he actually killed off in the last Wallander novel, The Troubled Man (2011).

Over the course of the series Mankell developed the character of Wallander so that, with the last novel,  Wallander is diagnosed with diabetes, suffers from memory lapses, and develops Alzheimer’s disease, like his father. The book ends like this:

“Wallander suddenly felt terrified. His memory had deserted him again. He didn’t know who the girl running towards him was. He knew he’d seen her before, but what her name was or what she was doing in his house he had no idea. It was as if everything had fallen silent. As if all the colors had faded away, and all he was left with was black and white.— The shadow grew more intense. And Kurt Wallander slowly descended into a darkness that some years later transported him into the empty universe known as Alzheimer’s disease. After that thee is nothing more. The story of Kurt Wallander is finished, once and for all. The years – ten, perhaps more – he has left to live are his own. His and Linda’s, his and Klara’s; nobody else’s.” (p. 481).

Time to kill off the character

I do not think this was a bit of self-prognostication. Rather, all writers who create really famous characters that practically take on a life of their own, have to contend at some point with how to end them or kill them off. An author can do it their way, in style, or have their character continued and perhaps mutilated after the author has also passed away, like with a disputed will. Mankell’s Wallander died in Mankell’s own words, and while reviewers fumed about it, it was, as far as I am concerned, acceptable. Take, for instance, the unfortunate furore that erupted after Stieg Larsson died and left an unwitnessed will. Swedish author David Lagercrantz has now written a fourth Millennium novel, featuring Larsson’s characters Lisbeth Salander and Mikael Blomkvist, called The Girl in the Spider’s Web (published in hardcover, by Deckle Edge, September 1, 2015.)

Larsson’s partner Eva Gabrielsson is understandably furious about this. She allegedly holds a draft of a fourth Millennium book written by Larsson, but has vowed not to release it, and told Agence France-Presse in an interview:

“They say heroes are supposed to live forever. That’s a load of crap, this is about money,” Gabrielsson told the AFP news agency in Stockholm this week.

I agree, and I am glad that Mankell killed off Kurt Wallander in his own way.

I had read all of the Wallander novels by Mankell that had been translated into English. I enjoyed his spare writing style, so like the harsh Swedish landscape, and the complicated, cleverly constructed plots. Though, by the time I read The Man Who Smiled, 2005, I was getting irritated with some of his writer’s quirks, like his obsession with all things Africa.

The Man Who Smiled – Review 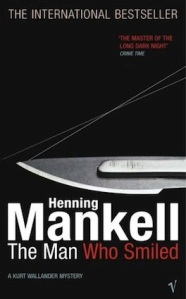 Henning Mankell has a fan base that is as crazy about him and his books as, let’s say, a stadium full of teens are about One Direction. Except that the Mankell phenomenon has been going since the 1990s, and does not seem to be letting up. Arguably Mankell’s greatest creation is the dishevelled detective Kurt Wallander, whose personal life is a fiasco, who takes stupid risks, always gets his man, and lives in Ystad, Sweden (where Wallander fans go on pilgrimage).

Mankell was something of an aging groovy, having been a left-wing political activist and pacifist in his youth, and he had a bit of a fixation with, as he saw it, the unspoiled beauty of Africa and the suffering of Africans, as only someone who grew up far removed from the continent can have. For him it was an exotic childhood dream, but as an adult he spent half of each year living and working in Maputo, Mozambique.

While Africa is a sub-theme that recurs in his novels, in the settings, the plots and the characters, the main theme of his novels is “What’s wrong with the Sweden of today?” Mankell’s answer is; just about everything, from the weather to the politics and social welfare system, and the increasingly twisted murderers as evidence of a sick society.

I thought that Mankell expressed the contrast between Sweden’s image of a Nordic paradise versus its underlying cold, isolated nature, by the recurring theme of the art of Wallander’s father. He painted the same landscape of a silly grouse in front of a darkly threatening forest – over and over, hundreds of times. Nevertheless, Wallander and his murky thoughts in the murky weather grow on you and are severely habit-forming.