Prue Leith, as Anglophiles and food show fans would know, replaced Mary Berry as the co-judge with Paul Hollywood when the hit show The Great British Bake Off moved from the BBC to Channel 4 in 2016. There were wailing and gnashing of teeth when presenters Sue Perkins and Mel Giedroyc decided not to stay on, and frantic mutterings about what sort of judge Prue Leith would be. But as Series 8 got underway in 2017, the moans and groans and anguished tweets quieted down and all was well. Until she did a leak-tweet about the winner. Well, it was her first time on the show.

So, has Ms Leith successfully filled Mary Berry’s shoes? Definitely. Prue Leith is as famous as food writer Mary Berry, CBE, aged 82. Prudence Margaret “Prue” Leith, also a CBE, born 18 February 1940, has been a restaurateur, caterer, television presenter, businesswoman, journalist, cookery writer and novelist. She was born in and raised in South Africa, and her working life has mostly been spent in the UK. She is Chancellor of Queen Margaret University, Edinburgh. She is Very Thoroughly British and sounds discreetly posh though she often dresses like a bohemian or flower child. And she has just published her 7th novel, The Prodigal Daughter, part two of a planned trilogy.

A few days ago, on a TV talk show, she commented that she disapproves of people having affairs – kind of old-school that, but she is 77 – a veiled reference to Paul Hollywood leaving his wife of 19 years after he had an affair, but also a criticism of her own behaviour. Leith met her (much older) first husband when he was married to someone else: “He was my mum’s best friend’s husband and we were family friends. I think adultery is wrong, I think stealing someone’s husband is wrong.” (Daily Mail UK, rtrvd. 2017-11-23)

In this novel, Leith keeps things very close to her areas of expertise: – cooking, catering, restaurants, food shows on TV, family and the importance of marriage and staying married and not having affairs. The Prodigal Daughter is partly about “Angelica Angelotti”, the talented daughter of a matriarch of a food empire, who has an unfortunate youthful romance with her cousin while she is studying in Paris. But the title is a misnomer. “Prodigal” – referring to the parable of the Prodigal Son in the New Testament book of Luke, means “wasting one’s fortune” or being “wastefully extravagant”, and returning home to one’s parents in poverty and shame. The Prodigal Daughter does return home from Paris to her family but is neither ashamed nor poor, rather the reverse. If someone had been wastefully extravagant in her life it is her bipolar lover. The 1960s “rebellion” referred to in the book’s blurb is also a damp squib: it is that she never married her lover and they Lived In Sin!! (Shock. Horror. Not.)

Honestly, I wish Leith, despite her age and her moral scruples, and her stated disapproval of affairs, could’ve come up with something a bit more sensational than that.

The book’s characters basically constitute an ensemble cast, with about equal time and effort spent on the matriarch, “Laura Angelotti”; her husband, “Giovanni”;  prodigal daughter “Angelica Angelotti” – sometimes referred to unnecessarily as an angel; daughter’s lover and Giovanni’s nephew, “Mario”; daughter’s secret admirer, Mario’s brother “Silvano”; the mean-spirited, ecocentric niece (?) “Jane, daughter of the Earl of Frampton”, etc. In fact, in that way, it all seems rather plodding, with the family opening, expanding and closing restaurant chains, bars and catering companies, while being quite terrifically good at everything they do. Even the irresponsible “son-in-law” Mario adds some value after he starts taking medication, and the evil niece, Jane, a caricature of a spoiled rich girl, just gets richer even though she poisons her parents with mushrooms – and never gets her comeuppance. (Police calls it an accident.)

The character of Jane in particular is so flat and one-dimensional that she reminded me of the fat, lazy, vain and stupid woman who gets strangled in “Out” by Natsuo Kirino (2004) which as been described as “slow, relentless, and banal” – “banal” is a good word for most of the characters in The Prodigal Daughter.

Is there a high point? Not so much. Suspense? Not really. The worst that happens is that one of the characters has a stroke and his wife and children take over the estate. Shall we suspend judgment on this book and wait for the third one in the trilogy? I’m not holding my breath. But…! 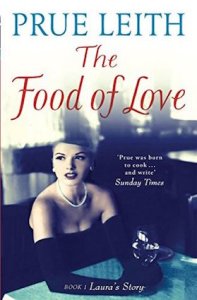 The most interesting and readable parts of the novel are Leith’s descriptions of the ins and outs of cookery school, different foods and dishes, running a restaurant and designing menus. The book is titled, after all,  The Prodigal Daughter: The Food of Love Trilogy: Book 2. Book 1 is called “Laura’s Story”.

Leith depicts not only the events in the families’ lives, but much more strikingly, the changing culinary trends, from cuisine classique, to haute cuisine, to nouvelle cuisine in the 1970s.

Leith comes into her own when describing, lovingly and in detail, the preparation, dishes and menus of each era – for instance the bistros of the 60s. It’s like a little cookbook within a novel, without the photos, but her words do quite well. So the critics have lauded her novel with praises like “delicious!” and “mouthwatering!”.

“‘Mademoiselle, the first thing you must learn in a French kitchen is that the only answer, the only answer, you give to the chef, is “Oui, Chef.” Nothing else.’ Angelica’s heart quailed but she met his gaze, her chin up. ‘Comprenez-vous?’ ‘Oui.’ ‘Quoi?’ ‘Oui, Chef.’” (p.36)

[Describing the latest in modern pub/bistro fare in the 1960 – truly a vintage menu:] 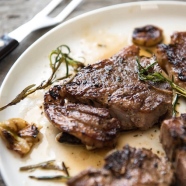 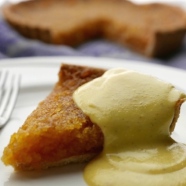 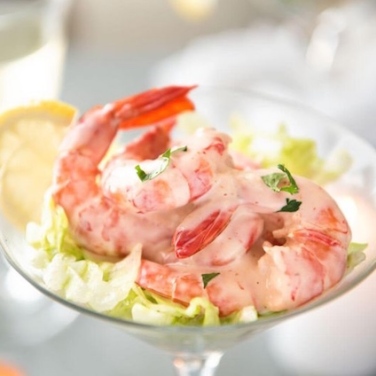 Recognize this? It was a favourite from wedding reception menus. Coupe “Caprice” (literally meaning “surprise dish”) is basically as starter of shrimp and melon in a pink sauce dressing, consisting of green peppers, red peppers, heavy cream, mayonnaise, melons, Tabasco sauce, tarragon, tomato ketchup and shrimp. The chef Robert Carrier included it in his 1963 book “Great Dishes of the World”, which included over 550 recipes from classic clam chowder to relatively modern langoustine soup with saffron bouillon. 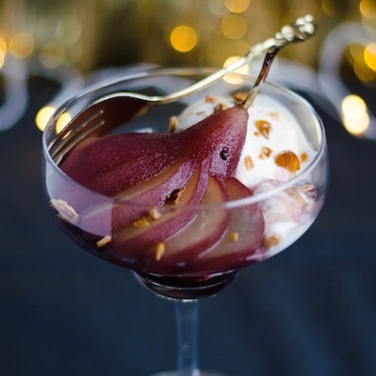 “And food looked so good, arranged with precision and an artist’s eye, the accompaniments enhancing the main ingredient. Extraneous decoration was out – no radishes carved into roses, twisted slices of orange, spring onions cut into bottle-brushes. Instead garnishes were relevant and edible: a spring of fresh tarragon, a couple of crossed chives, a strip of spring onion or leek trying together a bunch of carrot sticks or French beans.” (p.304)

That really does look like 1970s food. I can just remember eating out in those years with my parents, and seeing the plate with the carrot sticks tied together.

[Describing a centrepiece for party catering in 1973:]

“For the middle of the room, she had commissioned a huge ice sculpture of all the symbols of celebration: champagne bottles in buckets, flags, presents and flowers. The centrepiece of the dessert table was was a great platter of fruit, made with blown sugar. It looked entirely realistic, almost too perfect: red apples streaked with green, fat yellow pears, a half watermelon complete with black seeds, a cascade of apricots, a bunch of red and green grapes spilling off the edges.” (p.232)

Despite the rather better descriptions of all things foodish, ultimately I thought the novel lacks focus, and at times is quite boring, and the themes are simply not that important or interesting. (And the least said about the sex scenes, the better.) This is not the rather rude life and times of Anthony Bourdain or the mysterious and dramatic disappearance and reappearance of celebrity chef Jeremiah Tower. (Rtrvd. from Bon Appétit.com, 2017-11-24)

If you want to read about two families, Italian and English, in the food business? Go ahead. If you want a novel that will be remembered long after its publication and make you think? Move on swiftly to the next food novel of which there are plenty to make your mouth water and stir your soul. (List of novels about bars and restaurants rtrvd. from Barnes and Noble, 2017-11-23)

My favourite novels with food and cooking as themes