What is the connection between Mining Engineering and writing fiction? None. In fact, the minds of Mining Engineers often work the opposite way from those of who earn a living through their creativity. They deal with numbers, scientific facts, precision, established and accepted knowledge – not feats of imagination. So, after a life working as a Mining Engineer, is it even possible for someone to change that type of mindset and write a novel – moreover – a spy thriller? In the case of Jon Gliddon, the answer is yes. In his debut novel he successfully combines precision and detail with a twist of reality.

Jon Gliddon had a novel in him that wouldn’t go away, so after he retired as a Mining Engineer, he wrote and self-published Break in Communication. Let me say straight off, that it is good, in fact, very good. It is polished, even in tone, and has an intricate structure and plot that nicely draws the reader along to the conclusion, which, fortunately, is far from clichéd.

Gliddon manages to keep all the plot lines integrated while depicting a range of characters from Germans in the Netherlands, to an American in Iceland, to officers reporting directly to Winston Churchill in the UK – and a stiletto-wielding spy as well. The chapters are structured to progress the plot day by day, minute by minute, from Monday, 15 December 1941, to the climax on Monday, 5 January 1942 – 23 days, in other words. A few more days cover the aftermath for the  role-players, but Gliddon has carefully and precisely, like a good Engineer, plotted out the intricate schedule of events.

The fact in the fiction

But Gliddon’s subject is historical fact – perhaps not a commonly known fact, but publicly documented nevertheless. If the hand of the artist cannot be clearly discerned, then it might as well be a history reference work. So where did the segue from fact to fiction occur in this novel?

This picture shows cables being laid for a top-secret telegraph station at a cable being landed on Ascension Island, not Porthcurno – as was reported in local media. Oh well, it could’ve happened like that in Porthcurno, I suppose. (Image: Jon Gliddon/BNPS) 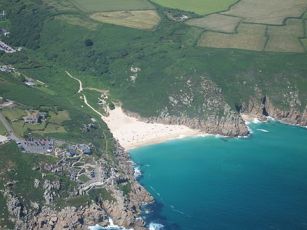 Porthcurno coast where the cables come ashore to a small building at the top of the beach. In the novel, the final scenes are played out on the beach and those towering cliffs.

A little place in Cornwall

Porthcurno, a small village on the coast of Cornwall in the United Kingdom, is unusually well-known because of its history as a major international submarine communications cable station. In the late nineteenth century, the remote beach at Porthcurno became internationally famous as the British termination of early submarine telegraph cables, the first of which was landed in 1870, part of an early international link stretching all the way from the UK to India. The cable office at Porthcurno was a critical communications centre and considered at serious risk of attack during WWII, since it was only about 100 miles (160 km) from the port of Brest in occupied France.

The station was therefore protected by a network of tunnels and cross-tunnels, excavated from the granite hills surrounding the station by – ironically – local tin mine workers. Added to that were attack- and penetration-proof defences which basically shut the place up like a vault. The Porthcurno telegraphy facility closed in 1970, and now fibre optic cables have replaced submarine cables. The facility is now the Telegraph Museum Porthcurno.

A cast of interesting characters and a leap of imagination

Where Gliddon takes a leap of the imagination, creating an Alternative History, is his meticulous mapping out of a plot for German agents to blow up this strategic facility. That never happened, but it could have.

“‘This telegraph station was vital for placing these orders and getting military intelligence back from various parts of the world on the enemy. The Germans did know about Porthcurno. There is a German reconnaissance photo that highlights the location of the station with a big red circle around it,’ Gliddon explains. ’But it was never subject to a bombing raid. The Germans did bomb an adjacent valley probably in the belief they had the right target. The local residents were certainly aware of the station although access to it was severely restricted, but the rest of the country wouldn’t have known.’” (Sam Tonkin, Revealed: The sleepy Cornish fishing village that kept besieged Britain in touch with the rest of the world WW2, Mailonline, 18 December 2015, rtrvd. 2018-08-25)

The twist in the tale is that Gliddon imagined how an attack on the station could have been executed by a foreign power. But he cleverly weaves all sort of subplots through that – a Dutch resistance fighter cum “honey trap” who lures German officers to their deaths, an American officer posted to Iceland who does not like flying and hates to be bossed around by an aristocratic Brit; Winston Churchill, wise to the ways of the world and instructing his clever young protégé, “Colonel Julian Bonham-Jones”, in the sneaky tactics of war politics. (Though I felt Julian was a bit of a sap when it comes to women. Imagine being taken for a ride by an obvious flirt like the office tea-girl. Nope. Col. Bonham-Jones is good with counter-intelligence and hopeless with female wiles.)

“Remember I said that in wartime the truth is so precious that she should always be attended by a bodyguard of lies? Well, this is a case in point, my boy.” (p. 194)

Though taking place during a specific moment in history, the novel is, in essence, a spy thriller, and the spy in this instance really knows how to wield a stiletto knife and dispose of the bodies. I was very pleased at the way the entire spy-and-destroy mission ends up, particularly because Gliddon turns the flow of the battle on one moment of a  junior telegraph technician’s desperate cunning. He does a small thing, like “James Bond” would, but that small thing saves the day.

The cast of ordinary villagers who smell a rat and decide to stand up for themselves is entertaining – little old men running around in their civvies wielding shotguns. There were no false notes that I could pick up on, not even the mention of a God-forsaken little mining town in South Africa called “De Aar”. You have to know the Mining industry to even think of mentioning it. I found the different locations, such as Fættenfjord in Norway, quite enjoyable to read about, since they added to the realism of the settings. In the case of Fættenfjord, it is the setting for a chase through the snow, with a resistance fighter langlauf-ing ahead and throwing hand-grenades, and the Germans shooting at him from behind.

“The wind was picking up and a bank of purple cloud to the east caught the last reflections of the setting sun. Minutes later, the wind started to swirl and blow snow grains in sheets across the icy surface. He started to feel more relaxed; he now had the advantage; he was on home turf and the weather was on his side. He’s been hunting these mountains in all weathers from the time he could walk. He put his head down and broke into a running action with parallel skis, kicking and gliding with each stride, the poles planted alternately on the opposite side to the kick. He could keep this up for hours if necessary.” (p.66)

Historical accuracy – is it necessary?

Every small detail in the book checks out, including the British invasion of Iceland. Yes, you read right. British forces did, politely, invade in 1940, to ensure that the Germans could not use neutral Iceland as a base from which to attack Allied vessels in the Atlantic. Naval and air bases included Reykjavík along with its harbour and seaplane landing site (Vatnagarðar), nearby landing grounds at Sandskeið and Kaldaðarnes to the east, the nearby anchorage at Hvalfjörður to the north, the harbour at Akureyri in the far north, and the nearby landing grounds at Melgerði. At the centre of the plot is the massive German warship, Tirpitz, which the Allies wanted to blow up.

“‘My guess is that Peleg and Bildad are Churchill and Roosevelt and that Queequeg and Tashtego, the harpooners, are Washington and Wichita. They are heading to Hvalfjörður as part of Operation Harpoon, which is to catch “the greatest whale of them all”, Tirpitz. It all fits, sir.’” (p. 90)

Indeed it does – very neatly.

The “real” in a fictional world

So the question is, does the book work as a fictional narrative? Yes, it is a proper novel, with every aspect carefully curated, and differentiated by the fact that it has local interest, Porthcurno, and that the interwoven plot is unusually complex.

But I sense in the author a smidgen of doubt, judging by the inclusion of the subtitle the book, on the cover; “the raid on Porthcurno Telegraph Station, Cornwall, during WWII”.

It serves to warn the reader to expect fact, not fiction. It pre-empts their own exploration and discoveries of the theme, the characters and the settings. Why not suggest – as the illustration on the cover, and the title do – that this is a historical spy thriller and whodunit, and leave it at that? The reader will then be pleased to have simply enjoyed the ride, and at the same time, found out something new about the use of telegraphs and super-large navy vessels in WWII. It is that little “value-add” or “food for thought” that give novels a longer shelf-life.

Basically, if I had not known about the history behind this novel, and not seen that sub-title on the cover, and not read the interviews with Gliddon, I would have read it happily unaware, and much less critically. And I would not have spent time fact-checking large chunks of the book. And you would not have seen all these photos in this post.

In the end, it does not matter if all the facts are correct in a novel. Adhering to reality, or factuality – showing the world as it is, or was – is nice, and helps the reader to make sense of things – but in fiction it is not a prerequisite. If the author can depict a complete fallacy, something totally imaginary, as factual, then it’s OK – it’s fiction, or Science Fiction or Fantasy, or a romance of whatever. A reader picks up a book from a section in their bookstore or online and expects fiction, or fact, or a blurring, such as the “non-fiction novel”. They turn to the title page and see what it is categorized as. One way or another, it is about what the book, and everything about the book, leads the reader to expect. It’s like a deal forged between the reader and the writer before the reader digs in.

In this case, Gliddon did all the right things. The story in his head came out just fine. I really enjoyed reading it. Next time around, he should just trust in his skills and fully commit to the fiction he is creating, from the front cover to the last page, to the promotions and interviews. I think he can rightly describe himself now as Jon Gliddon, published novelist, rather than Jon Gliddon, former Mining Engineer.

Jon Gliddon (Jon with no “h”) has his “authorly” story on his website, jongliddonauthor.com. After Break in Communication, Jon published Mud, Blood and Bayonet, non-fiction this time, about the 6th Battalion Dorsetshire Regiment and their terrible year of 1918. Gliddon’s grandfather H.A. Pike was a private in ‘A’ Company and took part in all the major battles. This book is the result of researching ‘his war’. My feeling is there are more war novels in Jon Gliddon, waiting to be told.

1 comment on “A precisely-crafted Alternative History – Break in Communication, by Jon Gliddon”