The last novel by John Scalzi I read, before this one, was Agent To the Stars (Tor Books, 2008), and perhaps I was not ready for Sci-Fi at that time. Ten years ago I was reviewing for a magazine and read whatever they put in front of me, which was mostly Historical and Romance novels. Scalzi was a blip on my radar screen and the book went right over my head. The premise – exactly like the title – of a Hollywood actors’ agent who is hired by an alien race to handle the revelation of their presence to humanity, should have appealed to me, since I worked in the PR business for my sins. I kept thinking that it wasn’t a futuristic enough, that it was all mixed up with the norms and news of the time. This John Scalzi novel, Head On, is almost the same. It is futuristic, yet, the novel seems to be a metaphor for the current politics of minority rights and identity.

The novel is the third in the “Lock In” series, which has the premise of a group of people, the “Hadens” who are “locked into” their heads due to a disease, and interact with the world through neutral networks and “threeps”, which are human-looking (but slightly enhanced) robots. They lie in their beds, connected to the Internet, and manipulate the threeps to do what they want to – work, have sex, play sport, etc.

“I have Haden’s syndrome. I contracted it when I was so young that I have no memory of not ever having it. Having Haden’s syndrome means you are locked into your body – your brain works fine but your body doesn’t. […] So the United States and other countries funded a ‘moon shot’ program of technologies, including implantable neural networks to let Hadens communicate, an online universe called ‘the Agora’ to give us a place to exist as a community, and android-like “Personal Transports’, better known as ‘threeps’, that let us walk around and interact with non-Hadens on a near equal basis.” (p.33)

The Hadens and their threeps have invented a sport, “Hilketa”, which is very popular and can be played only by them. The players (the threeps) go on to an actual field, with spectators; one is selected as the “goat”, and the others try to pull that player’s head off. Literally.

“The computer operated by the officials in the game operations room […] was supposed to select randomly from the defending players on the field who would be the ‘goat’ for the current play: the player whose head the offense would try to remove while the remaining players fought them off, with their bodies and game-approved weapons”. (p.9)

The threeps get their heads reattached after the game, since they are just machines, and keep playing. But in this game, the player dies, three times, the last time for real, in his bed.

When I read this I immediately thought of a whole bunch of killer games in Sci-Fi novels and films. First to mind was Real Steel, the 2011 film about violent fights between human-controlled robots, based on the short story “Steel”, written by Richard Matheson, which was originally published in the May 1956 edition of The Magazine of Fantasy & Science Fiction, and later adapted into a 1963 Twilight Zone episode. (So this is a real old idea. As early as 1938, the idea of sport matches against E.T. aliens was used in Rule 18, by Clifford Simak.) Sport Science Fiction is a specific sub-sub-genre of Sci-Fi, and there are two types of sport in these novels: “the gladiatorial circus” and “the hunt”. (Here’s a detailed analysis.) This novel has the “gladiatorial circus” style of sport. 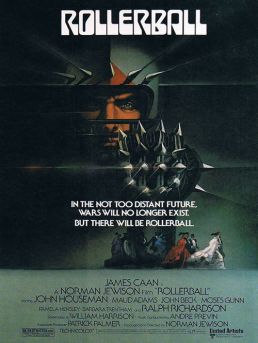 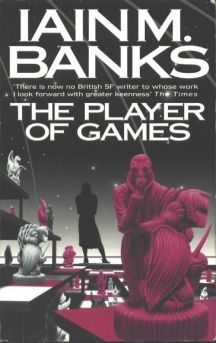 The Player of Games, by Iain M. Banks. You win this chess game, you rule the world. 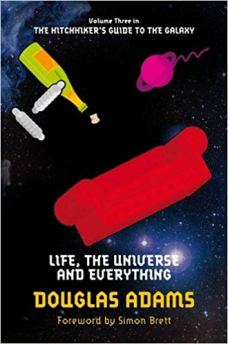 “Life, the Universe and Everything”, by Douglas Adams. Never has cricket been so violent, or been played at such great arms’ length. 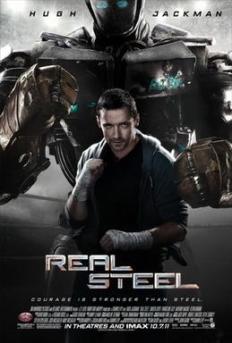 While being a Haden is undoubtedly a terrible fate, hardly remedied by the ability to remote control a robot, and therefore live a life, players who are not Hadens and think it all looks a lot of fun to be “North American Hilketa League” and make big bucks, protest this discrimination against the majority of people. The majority are able-bodied and thus excluded from playing. “Chris Shane”, a Haden (and the poster boy for Hadens everywhere), is an FBI agent whose threep is partnered with a hard-assed, smart-mouthed sort of woman, “Vann”, who is an normal human. They have to find out who killed the player, and why. All around them, though, the corpses continue to pile up.

It was entertaining to read the twists in the plot when robots meet the real world, like when Chris books the use of a threep in another FBI office, which has not been charged properly, and it runs out of power while he is in a burning building, saving a cat. The realization slowly dawns on the reader, that robots and Artificial Intelligence are just that, artificial, and that the scientific laws of the natural physical universe are the real bastards people have to cope with – conservation of energy, momentum and angular momentum;  gravitation, relativity, thermodynamics, etc. There’s nothing to be done about that. If your threep steps into a hole, it will end up mangled at the bottom. What goes up the stairs, must come down, armoured skeleton or not. If the wifi-network crashes, so does your communications. You might be lying in bed like a corpse, but your hair still grows and needs a cut now and then. And it takes a great deal of skill and effort to pilot a great hulking machine with your mind.

Do Chris and Vann and their smart but odd Haden housemates find out who killed whom, without getting themselves shot dead along the way? Well, untangling the plot is the point of reading a detective novel, and this is a classical detective novel in that Chris and Vann follow the money. And, like in all professional sports, the money is huge, the risks are massive, and the influence of the Hilketa League goes around the world. The dénouement explains everything, though Scalzi has, with this third novel, created such an all-encompassing, detailed, plausible world, that it almost seems a waste not to follow it up with a fourth one.

Scalzi’s book falls, in my opinion, into the Mundane Sci-Fi or Social Science sub-genres. There are no truly weird things in it, no space travel, aliens or new worlds. The laws of the universe, this universe, still apply. The robotics, the AI, are already with us today. The neural nets of the Hadens are here too, in the form of artificial neural networks.

Process rather than explosions

I found little that was strange in this novel, once I got past the first chapter in which Scalzi uses a newspaper report to conveniently give the reader the background details and the murder all at once. The clue in how to understand it, lies in Scalzi’s Acknowledgements at the end:

“This novel took me rather longer than usual to write, for a number of reasons but one big one being simply that 2017 was a raging trash fire of a year, filled with horrible people trying to do horrible things and often succeeding. It’s harder to bear down creatively when the world is burning. Head On is  important to me, not only because I like the world and love the characters who are in it, but also because, simply, it’s here and done. Every novel I try to do something new with my writing –  push a boundary of some form or another to keep growing as a writer and a creative person. This time around, it turns out the ‘new thing’ is writing a novel when an entire planet is trying to pull focus.” (pp.333, 334)

Scalzi, therefore, just got through the process, which he calls, “more process-y [sic] than it’s been with others”, rather than posit explosive concepts. Likely the novel is his way of showing up those who hijack the real problems of real people, and use the support for that small group of people for their own advantage. Haven’t we seen this before? Yes, I’m sure Scalzi looked at the headlines of 2017 and 2018 and just put his head down and wrote.

As for this reader, it will take more than Scalzi’s well-edited, (though sometimes a few more commas would’ve helped), slightly pedantic, neutral writing style to elevate his ideas in this novel to an unforgettable level. However, I’m impressed enough to give another of his books a try.

John Scalzi (born May 10, 1969) is an American Science Fiction author and former president of the Science Fiction and Fantasy Writers of America – which I quote liberally in my article on getting a literary agent. He is best known for his Old Man’s War series, three novels of which have been nominated for the Hugo Award, and for his blog Whatever – THIS MACHINE MOCKS FASCISTS which has been going since 1998. He won the Hugo Award for Best Fan Writer in 2008 based predominantly on that blog, which he has also used for several charity drives. (A rare award to get, but he does write copiously on just about everything on that blog – it’s like a book in the making.) His novel Redshirts won the 2013 Hugo Award for Best Novel. His books are top-notch, classical Sci-Fi and he is one of the Big Names in the genre, so what I say hardly matters, dear Readers. Why don’t you just go delve into some Scalzi and make up your own minds?