This is a New Weird novel/thriller/sociological discourse (?) about Linguistics in society, or to be more precise – Semiotics – and even though I have a MA degree in the subject, it really intrigued and challenged me. It is set in a comprehensive, holistic, entirely new created world. I have never read anything like it, and neither have I ever encountered the premise, setting, plot or the words Miéville invented for this novel.  You have to really pay attention while you read it, and learn – as the characters in the book do – the new language presented to you. Some novels are easily read and quickly forgotten. Not this one. It will stay with you and puzzle and please you long after you have put it down.

The basic premise of the novel is this: language – the words we have – are concepts, not meant to literally be the things they represent. The word “camel” is letters written down in a certain combination – and does not look like, nor is, the thing that is a camel. The connection between the word (the “signifier” in Semiotics) and what it represents (“the signified”) is abstract – words are not literal, they are figurative. Hieroglyphics were perhaps closer to the things they represent, because the hieroglyphic symbol for “a man” looked a bit like a man.

Now imagine a world where the inhabitants cannot communicate with each other, because the language of the planet’s original inhabitants – the “Hosts” or “Ariekei” – is based on literalness. This means that unless a word is a thing, and the thing is the word, they cannot understand it. They cannot lie, nor can they use metaphors, similes, or abstract representation. They have “LanguageFests” where the most artistic, talented Ariekei speakers perform extreme language tricks by trying to lie – for instance to say things like “the chair is red” when it is blue – though they can’t quite get it out.

“For Hosts, speech was thought. It was as nonsensical to them that a speaker could say, could claim, something it knew to be untrue as, to me, that I could believe something I knew to be untrue. Without language for things that didn’t exist , they could hardly think them; they were vaguer by far than dreams.” (p. 83)

The colonists on this planet, “Arieka”, at the edge of uncharted outer space, the “Immer”, solve the communication problem by having a clone farm where people who are particularly sensitive and receptive are paired to speak in one voice. These “Ambassadors” – two people communicating as one – negotiate with the “Ariekei” – by speaking together, mentally connected, so that their two voices sound like one, and they speak the “Language” of the hosts. These speakers are inherently truthful, and are taught the Hosts’ language. They are understood, but the Hosts never speak back to them. Not one word.

It’s better to be a metaphor

Basically, the Ariekei cannot speak because they cannot lie, and cannot lie because they cannot speak.  To this weird world of bioform factories that poop out machines, farms with legs that wander about, and buildings like living body parts, returns a traveller, “Avice”, who is one of the few humans on the planet who can withstand the problems of long-distance space travel. She grew up on the planet, and as a child, was the subject of a Host experiment: she was made into a simile. To understand the plot, it’s important to know the difference between a simile and a metaphor.

A simile is an explicit comparison between two different things, actions or feelings, using the words “as” or “like”. Similes are more tentative and decorative than metaphors.  In a metaphor, a thing, idea or action is referred to by a word or expression normally denoting something else, so as to suggest a common quality between the two. Expressing a metaphor, rather than a comparison, as in a simile, makes the statement more direct – but also more untrue. A simile would be “he is like a giraffe” – a metaphor would be “he is a giraffe”, meaning both the man and the giraffe are tall and have long necks. We understand that the man is not actually a giraffe though the comparison is implied.

Think for a moment what this implies for the pervasive use of the word “like” amongst teenagers. It weakens what they say and makes them look hesitant. Conversely, remember John F. Kennedy’s speech in West Berlin, on June 26, 1963, at the Berlin Wall, when he said “Ich bin ein Berliner” ? (I am a Berliner.) What he should’ve said was “Ich bin Berliner”. It’s not that the Berliners thought he was using a metaphor and calling himself a German jelly doughnut – a Berliner. They understood the context, therefore they understood his meaning – that he identified himself with the people of Berlin, and was one of them. Metaphors and similes are ways in which mother tongue speakers manipulate what they say and mean, and express complex emotions, intensity and ideas, and, as complicated and mixed-up as they often are, they also tend to get lost in translation.

“Avice” is one particular Simile, along with a handful of other humans. She becomes “the girl who was hurt in the dark and ate what was given to her”. She represents pain and submission, or something like that, to Ariekene. In the same way as a tattooed person might be a human work of art, she is a living breathing figure of speech. This collection of humans that represent abstract concepts is as close as the Ariekei can come to understanding human communication.  Her return to the planet, celebrity status, and new marriage, are turned upside-down when it is revealed, in a really complicated and chilling plot twist, that the latest Ambassador, “EzRa”, is not a doubled clone, but a pair of different men connected by implants. EzRa’s strange speech causes the Ariekei to get addicted to it, so that every sound they make causes the Hosts to go into shuddering, ecstatic highs.  Embassytown is under threat from the drugged-up Ariekei, from those of them who mutilate themselves to as not to hear, and from the Ambassador themselves (yes, plural!) who is playing God.

How this is resolved is amazingly complex and ingenious. Miéville in effect describes the birth of a new language  – or the birth of a “langue”, a language system, rather than a “parole”, verbal expression. You might think this would be deadly boring, but it is thrilling, edge-of-your-seat stuff. I realized at the end of the novel that it does indeed prove that thought is language, and language is thought. Without knowing a language, what is communicated in that language is completely inaccessible. Imagine the nightmare that people who are illiterate live every day. They are like the Terrans of Embassytown, helpless and unable to stop a war that will annihilate them because they have no way of making the enemy understand the one word: “Stop.”  Just that: Stop.

To describe the heard-but-not-spoken language of the Ariekene, Miéville has even invented a kind of “paired” writing system, using equations, to represent the “paired” speech of the Ambassadors. (Displaying Math equations in html is a problem, so refer to the graphic, above.)

Miéville himself, in an interview, highlighted the space travel in the “Immer” as the primary theme in the novel, the idea that communication and travel across space can take a long, long, perhaps infinite time. I liked the Linguistic aspect more.

Miéville has created a masterpiece here, with multiple fully explored and developed themes cleverly interweaved. There is no better word to describe this other than “genius”. It IS genius. Not: It is LIKE genius. It just is sheer genius. I haven’t been this impressed by the sheer scale of an author’s artistic accomplishment since Iain M. Banks. 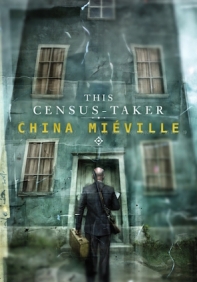 Other books by Miéville

Miéville is famous, infamous, notorious and revered amongst Sci-Fi writers. People get seriously riled up about his books, one way or another. Oh! The rages and rants! If you can understand his blog, The Rejectamentalist Manifesto, not updated since Jan. 2013, good for you. (I didn’t.)