Sci-Fi and Fantasy writers often present original concepts in their novels, but Cory Doctorow and Charles Stross not only invented new ideas for The Rapture of the Nerds, but an entire new lexicon. It is missing a glossary, but if you’re not the kind of reader who immediately needs to make sense of a book, then you can just let all those un-English words and speculative notions roll over you, and eventually something will come out in the wash. I had to read it three times to get the gist of it, but a couple of new words stuck in my head. One was “meatsuit” – the bodies that humans are in: as much as one would like information and even personalities to be in code and uploaded to the Cloud somewhere, we all live in meatsuits and if we leave the meatsuit we die. At least, that is what one would suppose.

This novel is so far-out in terms of imagining a possible future, that one’s worries about the logic, like the Internet merely being millions of computers wired together, and not a storage facility in the sky somewhere, doesn’t matter anymore. This is way-y-y-y beyond server farms, software as a service or the infrastructure of global communication networks with their gazillion interconnections, switching and routing devices, cables, earth stations, satellites and protocols. I have no idea what these guys had in mind when they wrote it, but my goodness, it is so out there. It is like a rupture (to pun the title) of received knowledge about the Internet and computing, and Sci-Fi conventions as well.

It is, on a page by page basis, actually funny. The main character, Welshman “Huw Jones” (what else but Jones?), is a Luddite – in as far as one can be a Luddite in the far future – and he is a pretty unimpressive guy. He wakes up one morning with a hangover and a migrating tattoo of a biohazard symbol on his forehead – like this one: ☣ He is like the most mundane, unheroic character ever to have to save humanity from extinction. Of course, that would be the problem – the extinction of humanity. I mean, which problem would be worse? Huw’s gutteral Welsh is apparently the thing that sets him apart from others and causes him to be selected for the mission of acting as a conduit for the life/death negotiations between humans and an extraterrestrial intelligence. I thought that was amusing. Yes, of all the funny-sounding languages in the world, Welsh would be one.

What stands out of this phenomenally imaginative Frankensteinian mashup would be:

“‘I spent decades of realtime imprisoned in a meatsuit, which betrayed me at every turn. It hurt. It needed sleep. It was slow. It forgot things. It remembered things that didn’t happen. And worst of all, it tricked me into thinking that I was nothing without it – that any attempt to escape it would be death. [It was!] Brains are awful, cheating things. They have gamed the system to that they get all the blood  and all the oxygen and all the best calories, and they’ve convinced us that they’re absolutely essential to the enterprise of being an authentic human. […] It was only once I was running on a different substrate, [….] …only then I was able to see and feel and know what I’d been missing all those years.’” (p.216)

Just a note: amongst other things, “substrate”, in the quote, refers to a branch of computing called unconventional computing, in which – in theory at least – methods that are based on non-standard paradigms are used to model computational operations. In short, they believe that, as opposed to using classical silicon-based micro-transistors or solid state computing technologies, computers can be made out of almost anything. So this form of computing research is a substrate – substrates underlie, ground, sustain, or nurture some activity or state. And the system to which Huw (he and at other times, she) was uploaded is also a substrate. And so’s the goo on a petri dish in which you grow green things that squirm. And so on.

“She discovered that she is hyperaware, hyperalert, feeling every grain of non-dust in the not-air individually as it collides with her not-skin. Oh, oh, oh, enough, she wants to shout. What is the point of all this rubbish? This is the thing that Huw has never wanted to admit: Her primary beef against the singularity has never been existential – it’s aesthetic. The power to be a being of pure thought, the unlimited, unconstrained world of imagination, and we build a world of animated gifs, stupid sight gags, lame van-art avatars, stupid “playful” environments, and brain-dead flame wars augmented by animated emoticons…” (p.296)

“There are rumors about the depraved and perverted practices of the pulchritudinous protestant puritan plutocratic penis-people priesthood, of shadowy bacchanalian polyamorous practices…I suspect, to be blunt, someone was blackmailing him.” (p.278)

If you think that is nicely alliterative, it is, but that is what the leftover United States freaky church where Huw ends up is described as – perverted, etc.

“It’s like the surface of the moon – or worse. A lightning strike somewhere up the coast has set one of the petrochemical forests on fire, and the resulting smogbank has smeared the sky with the apocalyptic glow of a bygone age. The sun itself is a bloated red torch aflame in a sea of shit-colored clouds that roil  and bubble above a landscape the color of charred ash.” (p.161)

I ain’t saying it’s poetry, but it forms an interesting mental image.

“Different governments all tended to blur at the edges anyway, into a weird molten glob  of Trilateralist Davos Bilderberger paranoia, feuding and backbiting in pursuit of the biggest office and the flashiest VIP jet.” (p.239)

And that’s my take on it: entertaining, and if I had the time to look up all the references, probably the source of new insights into Virtual Reality. At least I got the bit that concedes that meatsuits can be vastly improved, but ultimately, being a flesh-and-blood human with good taste, is way better than being a super-aware simulation with bad taste. 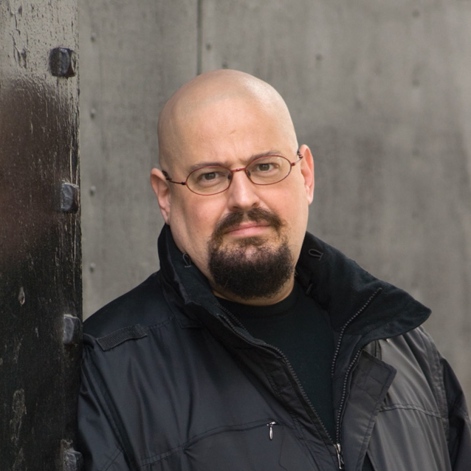 Charles Stross (Photo by John Earle, in This sci-fi author thinks Amazon will cause an apocalypse, 08.02.14, wired.com.)

Charles (or Charlie as he refers to himself) Stross describes Rapture of the Nerds like this: “The comic prat-fall thematic sequel to “Accelerando”, interrogating the whole concept of the Singularity and finding it makes a great setting for farce. Co-written with Cory Doctorow, as two novellas and then a fix-up.” I did not notice any switch between writing styles in the novel, it was pretty seamless. Well done, you two.

Cory Doctorow was born in Canada and now lives in London, UK, and his website, craphound.com, is here. He warns that it is probably horribly out of date. He is no relation at all to Sci-Fi writer E.L. Doctorow.

Charles Stross is an award-winning Scottish SF writer. I wonder whether that explains the fact that Huw, a Welshman, wears a kilt? His website, antipope-com, is here.

Leave a request in a Comments section.