You could be tempted to dismiss Roger Moore’s autobiography, My Word Is My Bond, as a bit of a joke, as light as his portrayal of “James Bond”. After he died, on May 23, 2017, at his home in Crans-Montana, Montana, Switzerland, I ordered his autobiography because so many people took the trouble to comment that he was a really decent human being. Others commented that he was the embodiment of the particular version of “James Bond” that he portrayed in seven James Bond films. I thought that was rather a contradiction and wondered what it meant. I am a die-hard James Bond fan, and of all the James Bond actors, I like the early Sean Connery films best, followed by Daniel Craig’s interpretation.

Why? Because Bond, as Ian Fleming wrote him, is a cold-hearted, ruthless, callous bastard, efficient at killing, stupid with pride and over-confidence, a gigolo in service of Queen and Country, a sociopathic loner, not very cerebral, and an all-round self-satisfied, handsome a**-hole. And the way Connery and Craig played him fits the Fleming mould.

Moore recreated Bond to suit himself

Moore, on the other hand, recreated the character to suit his own persona, rather than the other way around, as would be expected when playing an established and famous fictional character. His Bond became a more expressive, yet more laid-back, smooth and witty spy. He mentions that when he was required to rough up his leading ladies, he objected since he felt it did not suit the character. Moore did not formally study acting. He spent three terms at RADA, but he was largely self-taught. So he didn’t have much of a choice but to play himself. And what was he?

Six-foot something, handsome, charming, funny, but as yet unskilled. He had left school and somehow, because of who he knew and what situations he stumbled into, went from role to role to role, building a life as a director and “working actor” (“If you don’t have work, you can’t call yourself an actor” as he says.) He frankly acknowledges that he had a lot of luck in his life.

Moore on becoming an actor

Moore’s saving grace was, I believe, not his looks, but his voice. Like Connery, he had the sexiest low, mellifluous, tenor voice.

‘You are six-foot-one,’ he [Joe Graham, dialogue director] observed one day. ‘Why do you only stand five-foot-ten? Stand six-foot-one. Did you ever go to university?’ I said no. ‘Are you afraid if you say something you might use the wrong word?’ I said yes, I was. ‘That’s why they think you’re too English. You don’t open your mouth because you’re subconsciously afraid of what might come out.’ Immediately, I felt my jaw loosen. ‘It doesn’t matter what you say or mispronounce when we’re working together. I’ll be there to make sure you get it right.’ Our conversations carried on in this vein over several sessions and Joe worked on every production at Warner’s with me. I found that I began to speak more fluidly, no longer worrying about what people might think of me.” (p.129)

His emphasis on the voice as one of the primary tools of an actor is a familiar topic in the writings of actors and singers. In Life Beyond Measure, Sidney Poitier wrote of his early years when he arrived in the USA both penniless and mostly illiterate, and found a job as a dishwasher. He recognized that it was the “need to read better and to speak better”, driven by a rebuff or the lack of such skills, that put [him] on the road to becoming an actor.”  One day, he confessed to an older waiter that he could not read very well, and the gentleman offered to read with him, eventually even coaching him on pronunciation.

Moore also made it his business to learn, to perform at his best, to always thank and help those who helped him, to stay humble and keep his sense of humour. Almost without fail, everyone whom he mentions in the book taught him something or somehow gave him a push forward in his career.

Always problems with the weight

You’d think that someone so good-looking would have no problems finding work as an actor, yet, Moore was always worried about his health (he calls himself a hypochondriac in the book, and lists and thanks his doctors in the last chapter) and specifically, he worried about his weight. Despite being tall, he easily gained weight and showed it, and would have to work off the weight every time a director commented that he was too fat. He mentions in the book that he once turned down an action role because he couldn’t stand the thought of keeping his stomach pulled all the time while they were shooting. Personally, I always thought he looked kind of soft and tended to have man-boobs. I could never detect defined muscles, just pale and freckled plumpness. He sure was no Daniel Craig, arising from the ocean like a Greek god in small blue swimming trunks! But he did look fantastic in a suit.

Moore was so aware of this shortcoming, that he once got addicted to an appetite suppressant. On his very busy website full of interesting stuff, he answered the question, What don’t you like about yourself? in 2009, as follows:

“My appetite and my waistline. I can’t do as much exercise as I used to, and I still like to eat so I have to go through periodic days of not eating too much. It’s a huge bore.” (Roger Moore old official site)

Apart from the voice, I believe good looks lie in the eyebrows. Yes, the eyebrows! Check out actors with classic good looks and you’ll see they have well-defined, strong eyebrows. (Connery, for one.) In his youth, Moore had darkish brows, but as he got older, these all but disappeared, leaving him looking slightly pop-eyed, especially when he raised one eyebrow.

There are no scandalous revelations in this book. I believe he wrote his life like he lived it. Moore was a civilized man, a gentleman, who, it seems, regretted the hurt his three failed marriages caused and actually mentions the reasons why only very briefly in the book. He hated and refused to work with one or two people, and only goes so far as to write scathingly about Hjördis Genberg, the wife of his very good friend, David Niven. He hated her behaviour after David Niven died. But for everyone else who he knew, he had only kind words and respect. Rather sweet.

Overall, it is quite episodic, and in places very funny. His writing style is straightforward and succinct. (He acknowledges having had an editor’s help.) He name-drops, though many of the people he mentions would be unknown to today’s film-goers. He is lovely in his account of his wife Kristina, who survives him, and their children. It seems he thought himself very lucky to have found her, and loved her and their children very much. He praises them affectionately, and it seems he was loved in return, by them and many people in the industry. Ultimately, though, he recognized that, after becoming the Saint, and Bond, and all those heroic figures in films, and Sir Roger George Moore, KBE, he was still just the self-conscious, kind-hearted , extraordinarily lucky boy with a mole by his nose. (The mole was removed when he became really famous.)

Often when reading autobiographies, I feel that the voice of the author has been lost, due to all the edits and rewrites by ghost writers and co-authors and editors. It feels like there is nothing personal there, no kernel of the essential self. It is difficult to define, but they read like ghosts or shadows are speaking – they are so carefully curated and pruned. Keith Richards’ autobiography, Life (2011), reads at least until halfway through as though the writer was insane and definitely high. So it is Richards’ voice all right. It even reads as though he is singing parts of it. In this instance, the voice of Roger Moore, the man and the actor, is clear. This is him, with the kind of infantile jokes and the occasional F-word, and the lots of complimentary superlatives.

I had no idea that Moore had written so many books about the film industry and his role as Bond. I suppose I never thought of him as an author, rather a UNICEF Ambassador, actor, voice-over artist and actor. The next one, Roger Moore: À Bientôt…[meaning see you soon, or see you later], by him and Deborah Moore, his daughter, will be published posthumously on Nov. 1, 2017. 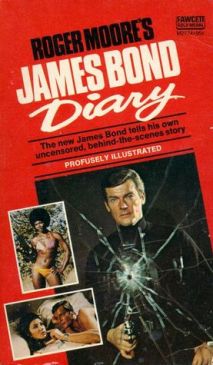 Earlier, he had written One Lucky Bastard: Tales from Tinseltown (hardcover: 272 pages, publisher: Lyons Press, Oct. 21 2014); Bond On Bond: Reflections On 50 Years Of James Bond Movies (hardcover: 224 pages, publisher: Lyons Press, 1st edition, Oct. 16 2012); Last Man Standing (publisher: Michael O’Mara Books Ltd., Sept. 4 2014) and Roger Moore as James Bond 007, with his ex-wife Luisa Moore as photographer (paperback: 192 pages, publisher: Macmillan, July 6 1973). This last one is a daily journal of his experience making Live and Let Die. (An excellent and very informative review can be found here.) It has also been published as Roger Moore’s James Bond Diary (paperback: 184 pages, publisher: Fawcett, 1973). It seems he realized early on how important this role was going to become, and documented it all.