I think people fall into three categories: 1) those who read the book first, then go see the film of it; 2) People who see the film first, then go read the book on which it was based and 3) People who don’t give a damn either way. I’m one of the first category of readers and film-goers, and I have always cast scorn on those who take the easy way out – category 2. Now I have to eat my words and admit that in the case of A Man Called Ove, the best-selling novel and highly-rated film, I was wrong, on two counts. First, the film is much better than the book, which I had criticized negatively in my review, and second, if I had seen the film first I may have liked the book better. And here’s why…

The secret to why all of a sudden the story brought tears to my eyes and made me laugh, is the excellent acting of Rolf Lassgård, 62, who is known in Sweden for his roles in crime movies, and the actor who plays his younger self, Filip Berg, 30, also Swedish. They are both really, really good.

The two who play the main character, “Ove”, are like a coin with the same face on both sides. The character development, in facial expression, movement, stance, voice, eyes, is seamless from the young man to the old. Even the clothes they wear, including the bright blue suits, is carried through. (It must be noted that the film was nominated for two awards for Best Makeup and Hair, and won one. The changes to Lassgård’s and Berg’s appearances are subtle and natural.)

Rolf Lassgård as old Ove, in his blue suit, ready to do himself in. (Source: http://www.filmweb.no/profil/article858833.ece) 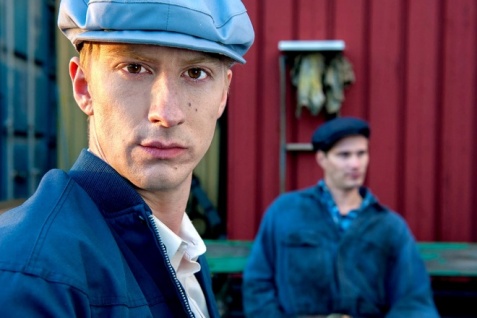 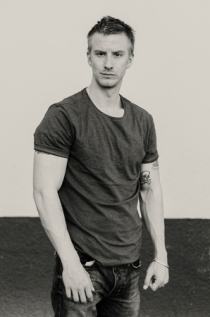 But scriptwriter and director Hannes Holm is the genius here. He took the most irritating aspects of Backman’s novel and either left them out or de-emphasized them. Not all the detail in a book can be shown in a film, so of course it will be less of everything. But Holm was smart in his selection.

Holm’s treatment turned the rather irritating book into a surprisingly enjoyable film. What he did is an example of less being more. Careful pruning did the trick, and the rest was left to the audience’s imagination, thereby becoming more accessible.

I explained in a previous essay that readers feel connected to fictional characters that are well-depicted. A “well-rounded” character, that is depicted as behaving in a congruent fashion, and exhibits behaviours that we recognize (in other words, that are realistic), can easily become real or almost real in a reader’s mind. Film depictions, and good acting, can make this happen. It implies that, if we do not recognize the character’s behaviour and they are either non-congruent, or non-familiar, as in the case of the “Ove” character in the book, who is eccentric and bad-tempered to the point of being abnormal, we would not promote the character to someone real in our minds. As a result, we would like the character less.

It also proves that, with novels, and with screen adaptations, the devil is in the detail.