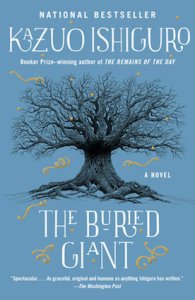 I know a good thing when I read it! Yesterday, 5 Oct. 2017, the British author Kazuo Ishiguro was named this year’s winner of the 2017 Nobel prize in literature. He said he was both honoured and “taken completely by surprise”, even initially wondering if the announcement was a case of “fake news”. Poor man. When contacted by the BBC, he admitted he hadn’t been contacted by the Nobel committee and wasn’t sure whether it was a hoax. He responded that;

“It’s a magnificent honour, mainly because it means that I’m in the footsteps of the greatest authors that have lived, so that’s a terrific commendation.”

I reviewed his latest novel, The Buried Giant, which was marvellous. Ishiguro also wrote the acclaimed Never Let Me Go (2005) and The Remains of the Day (1989) – both books were filmed. Author Will Self  – who has himself won multiple awards, commented on the announcement:

“He’s a good writer, and from what I’ve witnessed a lovely man, but the singularity of his vision is ill-served by such crushing laurels, while I doubt the award will do little to reestablish the former centrality of the novel to our culture.”

Ouch. A “good” writer. What is that – faint praise? Is “a lovely man” better?

Well, “crushing laurels” of the international awards and knighthoods varieties do put authors onto pedestals, like sculptures of long-dead Roman generals with the instant gravitas (and dullness) of the laurel leaf crown. Ishiguro has already been heavily lauded since he has been awarded the Booker Prize, Order of the British Empire, and Ordre des Arts et des Lettres.

And sometimes I wonder whether the prize is as valuable if others have won it who are somewhat…unusual? Remember, the Nobel Prize in Literature 2016 was awarded to Bob Dylan “for having created new poetic expressions within the great American song tradition”. That floored me. With that criterion I would’ve given it to Leonard Cohen – a much better poet and lyricist.

Such an award might not make the novel as an art form great again (but was it ever not great?)

Despite the cons, I’m just an avid reader and for me the main pro to this argument is that I love it when the literary establishment recognizes an author I admire. It is a matter of prestige and recognition of hard, difficult work. And of course, it proves I still have good taste in books (sly smirk!)

Besides, the prize comes with nice money for a “starving artist”. In 2016, the Nobel Foundation decided that each prize would include roughly 8 million Swedish Krona, or $923,179.20. The gold medals that each winner gets also carry a hefty price tag. Two earlier Nobel winners have sold their medals, fetching $765,002 and $4.7 million in auctions.