I went to Iceland in August 2017 in the company of a Geologist to see volcanoes and other spectacular geological formations, not to go look at the places where Game of Thrones was filmed. It was not literary tourism, though I took with me Sjón’s award-winning 2011 novel, From the Mouth of the Whale, which is set in 17th century Iceland, on one of the country’s particularly barren and lonely offshore islands or islets. I wondered how well Iceland would match his descriptions of the towns and landscapes in From the Mouth of the Whale. What I observed changed my understanding of the book, which, I admit, I had found very difficult to read.

An islet off an island

“This memorable, magical book tells the story of an Icelandic sage banished to exile on Gullbjörn’s Island in 1635. Caught in the grip of superstition, Iceland’s establishment has decided that the self-taught healer, Jonas the Learned, is a practitioner of the black arts and sent him away to a “bird-fouled rock”. Sitting there with nothing more than a sandpiper for company, Jonas is then drawn into an epic adventure, by turns surprising and surreal. Sjón’s remarkable tale imagines a delirious 17th-century Iceland swithering between mysticism and a new scientific rationalism, and it is rendered brilliantly into English in Victoria Cribb’s exuberant translation.” (Nick Barley in Independent’ Foreign Fiction Prize shortlist: A whole world in their words, by Boyd Tonkin, 12 April 2012, independent.com, 2017-09-09)

Poor “Jónas the Learned” contemplates his past while living in exile on a small island, in fact, an islet off an island. He rambles on in a surrealistic stream-of-consciousness monologue, sometimes talking to birds, or the sea, or dead people. Sjón calls the island “Gullbjörn’s Island”, on the remote “northwestern Snjáfjöll coast”. Some book sleuths have been able to trace the island and the part of the coast where it is located, but it must be said that the mere reference to an off-shore Icelandic island is enough to conjure up any number of images of lonely, barren, harsh, sea-bird-filled, cold, miserable rock outcrops.

The island, as well as the other places mentioned in the novel, could be anywhere in Iceland. The places are archetypes, representative of a time and place in Iceland’s far past, when their circumstances made people hard and cruel, and their belief in gods and myths sustained them. When you drive to the north of the island, east or west, you frequently see the mouths of fjords, the inlets and the beaches dotted with islands that are rocky outcrops, some connected by causeways to the mainland, but many just out there, like pointy silhouettes on the horizon. Every little village and hamlet has its church, and often, every house has a waterfall behind it, and a church beside it. And nearly every bit of coast has an island or rocky outcrop offshore.

Ignore the traffic and the electricity pylons, and you could be back in Jónas’s world, around 1635. Particularly when you go off the main route and cross the centre of the island over the lava fields, driving over the ice fields and past volcanoes, you recognize the hardness of this land. It is what it is, and what it has always been, apart from the natural forests that were all cut down: rumbling and smoking, hard and arid, cold and windy at the best of times, with mean-looking sheep. 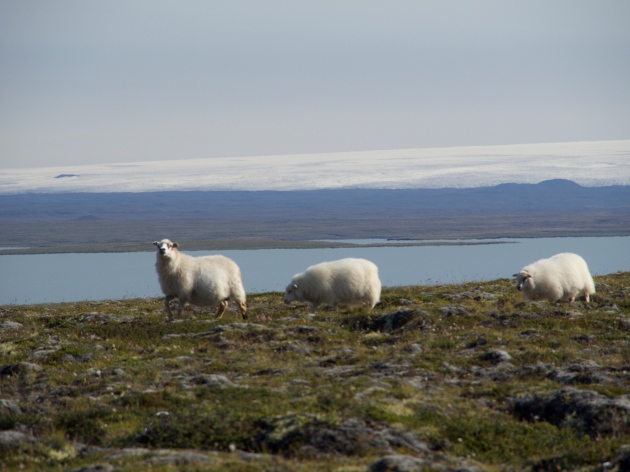 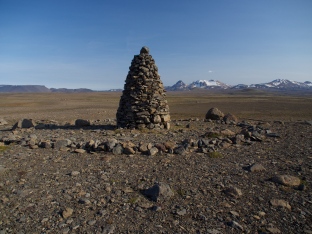 Eyva Varda – Eva’s Cairn. Monument or navigational beacon named after one of the ‘bone women’, living on the margins of society and who historically roamed the backcountry of Iceland, spreading news and gossip. They sound like archetypal witches, although the only ‘witch’ burned at the stake in Iceland was a man. Photo ©MF O’Brien 2017 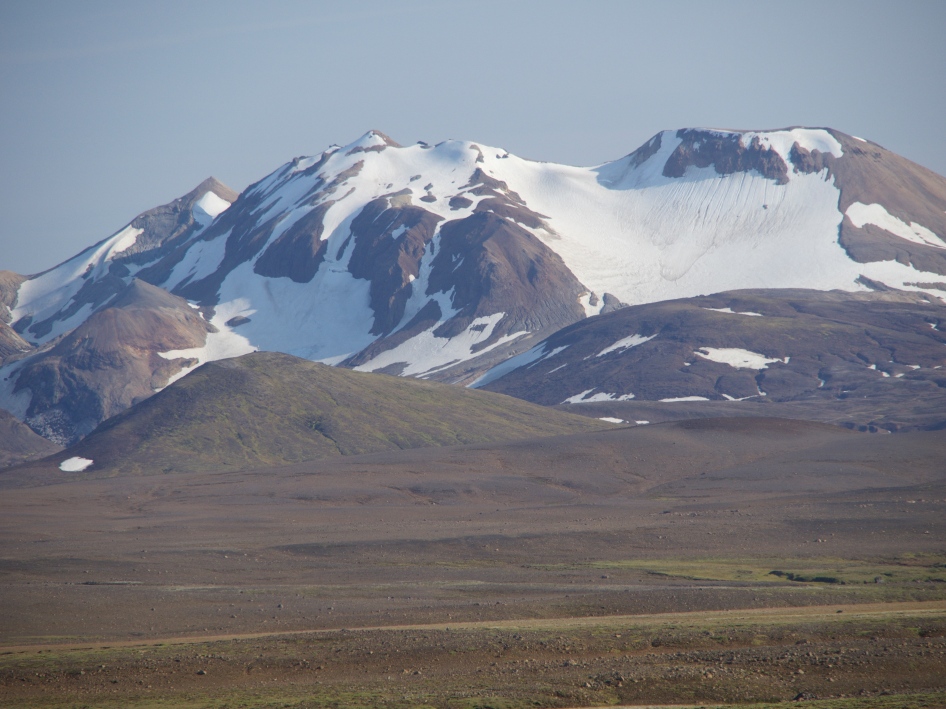 When I read Sjón’s descriptions again, I realized that they exactly reflected what I saw around me, and I wondered how much of the novel is fact and how much is fiction? Even the incident of the murder of the Basque whalers, that seemed so exotic when I read it, looked pretty normal when I checked the history of whale, cod and herring fishing in Iceland. Also, Sjón really gets the fine details exactly right, for instance those damned Icelandic sheep that roam all over the place and stare at you with “malignant yellow  eyes” when you try to edge past them in your car. Exactly right!

“The sheep lowers its head, grunting angrily as if I were somehow responsible for its plight…There is nothing as wrathful as the glare of a sheep that believes it has a grudge against one; no animal seems to believe as unconditionally as the sheep that we govern the world and that every mishap that befalls it should be laid at our door…The sheep snorts…I snort back…Abandoning the idea of butting me, it bounds back toward the shed…Never mind the music of a whole island, I must make amends for the animal’s behaviour…” (p.189)

The Basque whaling incident is historical fact, though it is bloody and horrible. Basque whalers were documented as fishing off the coast of Iceland as early as 1610. Probably due to the barring of Basque ships from Spitsbergen by the English in 1614, 26 Basque ships set sail for Iceland in 1614. Only ten reached Iceland, and most spent the summer in Steingrímsfjörðer. In September of that year, three of the ships (under the commands of Martinus de Billafranca, Pedro de Aguirre, and Stephan de Tellaria), while preparing to leave, were sunk by the combination of a sudden storm and drift ice off the coast of Reykjafjörður (now Reykjavik). Of the 82 whalers that came ashore, thirteen were killed while spending the night at a seasonal fishing station. Another eighteen were killed at Ísafjarðardjúp in a campaign by the local sheriff, Ari Magnússon, who wanted to protect the livelihood of the inhabitants. No foreign whalers are mentioned whaling off Iceland for nearly a decade after the massacre. (Source: History of Basque Whaling, Wikipedia, rtrvd. 2017-09-09)

The creativity in the novel comes from Sjón’s descriptions of what a man of those times was thinking – rambling between talking to the birds, laughing about “scientific” discoveries, chasing after zombies, figuring out how waves, the moon or the plants work, getting swallowed by a kindly whale, being imprisoned and tortured, or mourning his lot. The text is relentless – page after page of a madman’s ravings, or it is the ramblings of a wise man? Occasionally, Sjón describes a moment which is heartrendingly tender or profound, like when Jónas discovers the corpse of his wife, but those are few, and you might miss them. What is there, like a big, raw fist in your face, is the sheer, naked personification of the Icelandic landscape. This is place as a persona, with a vengeance. The landscape, the weather, the seasons become a person that Sjón makes as real as poor old, abused and slightly nuts Jónas. As Sjón himself has said:

“If you actually lean on an Icelander, most of us will confess to believing that nature has the power to manifest itself in a form understandable to humans. So the hidden people, you know, we would say, ‘Well of course I don’t believe that there are actually cities inside our mountains, but it’s possible that nature has a way of manifesting itself in a human form to, you know, have an interaction with the humans.’” (podcast of Sjón in an interview with Leonard Lopate, rtrvd 2017-09-09. )

Surrealist elements in the novel

Sjón’s roots as a writer lie in Surrealism, which he has brought into his fiction writing, as well as his poetry and lyrics. When he mixes up fantasy, alchemy, ancient beliefs and waking dreams,  with science and rationality in his descriptions of 17th century Iceland, his Surrealist style is simply a recreation of Iceland’s past, and in some respects, Iceland’s present.

“The novel itself ripples with waves that are by turns historical, naturalistic, and fabulist. And no wonder: if, as Sjón suggests, Iceland’s literary trajectory is marked primarily by its increasing speed to catch up with developments on either side of the Atlantic, it’s unsurprising to see Sjón treating its various literary traditions less as a narrative line from some distant source than as a swirling whirlpool created by conflicting currents.” (David Bukszpan, Sjón, Björk, and the Furry Trout, in the Paris Review, May 16, 2013, rtrvd. 2017-09-09)

But this is not so odd considering that is what Surrealism is: it is based on the belief in the superior reality of subconscious associations, dreams and the uncontrolled “play of thought”, so that dreams and reality are naturally and seamlessly combined.

So, it is fortuitous that the dream-world Sjón created for Jónas Pálmason so closely resembles the current landscape of Iceland. And when you are there, staring at the expanse of grey rock and blue-white snow, it is not hard to imagine that you have stepped back in time into the world of Jónas, where dream and reality, faith and science, Surrealism and Realism, come together seamlessly. That is perhaps where the charm of Iceland really lies. Knowing this made the novel easier to understand, but for me it remains a difficult book to read and like.