Sometimes reading is work, and the more I read to review the rarer it is that I discover a book which will keep me intrigued time after time, and which I can praise wholeheartedly and make me simply say to others, You. Must. Read. This. So which book have I read this year that I would call profound and totally brilliant? The answer is not a novel, though it could have been considering how dramatic the story is. It is The Emperor of All Maladies: A Biography of Cancer, by Siddhartha Mukherjee. It was published in 2010 and won Mukherjee the 2011 Pulitzer Prize for General Non-Fiction – and a long list of other awards as well. It is superb – and upsetting, depressing, riveting, horribly eye-opening and generally very, very hard to take in more than a chapter at a time. You read a bit. You shudder and feel quite ill with what it makes you visualize. You put it down. You take a few deep breaths. You read some more. And so on. 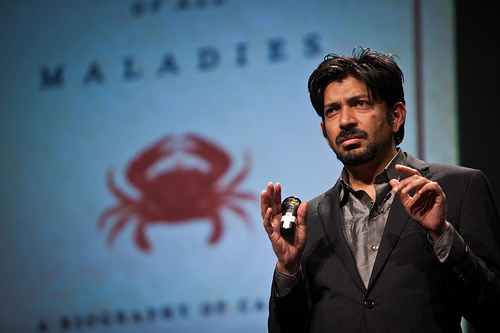 Dr. Siddhartha Mukherjee – Since 2009, he is an Assistant Professor of Medicine at the Columbia University Medical Center in New York City. He is young (47), handsome, skilled, clever and a genius writer.

The book is the history of cancer, from when it was first identified by the ancient Egyptians to the researchers, protocols, discoveries, setbacks and continuing mysteries in the treatment of the disease today.

The oldest surviving description of cancer is written on a papyrus from about 1600 B.C. The hieroglyphics record a probable case of breast cancer: “a bulging tumor . . . like touching a ball of wrappings.” Under “treatment,” the scribe concludes: “none.” None. How dreadful that one word is.

His descriptions of the politics, the people involved and their thought processes and inspirations are fascinating, and at times the book reads like a kind of war, with generals and defences, plotting and maneuvering, foot soldiers, weapons and millions of victims.

“In that haunted last night, hanging on to her life by no more than a tenuous thread, summoning all her strength and dignity as she wheeled herself to the privacy of her bathroom, it was as if she had encapsulated the essence of a four-thousand-year-old war.” (p. 470)

Saddest of all are the descriptions of the children who died of cancer and on whom the first cures for leukaemia were tried out decades ago. That made me have to take very deep breaths and close my eyes. He does not pull any punches, quoting from the heart-breaking journals of patients, their families and doctors.

The level of detail is deep and revealing. It is like beautiful poetry, but about mutilation and pain and the dreadful, all-consuming desperation of sufferers and doctors alike. There is a sense of urgency, with all involved working against the clock, year after year, decade after decade, to try and unlock the genetic puzzle which would stop cancer cells from forming or kill them off or contain their spread. It was very strange to read about such terrible things that are so terrifyingly complicated, in such exquisite, clear, understandable language.

Mukherjee did not need to over-dramatize anything in his text. He uses no exclamation marks. He introduces medical and scientific terms by explaining them systematically and does not descend to dumbing-down techniques. But he manages to make science sound like literature – it’s not only what is seen, but what is felt – the emotion it causes:

“A drop of blood under Farber’s microscope revealed the identity of his illness; thousands of immature lymphoid leukemic blasts were dividing in a frenzy, their chromosomes condensing and uncondensing, like tiny clenched and unclenched fists.” (p. 33)

“The cells look bloated and grotesque, with a dilated nucleus and a thin rim of cytoplasm, the sign of a cell whose very soul has been co-opted to divide and to keep dividing with pathological, monomaniacal purpose.” (p. 339)

As a clinician, oncologist and haematologist, he is carefully optimistic. He intersperses the history with insights into his own struggles to help his patients. He documents the advances as well as the setbacks, the moments of relief and remission, but also the return of the diseases, and death. The victories are few, but worthwhile, and for Mukherjee, what matters is the return of people from “the kingdom of the ill”.

“It is an old complaint about the practice of medicine that it inures you to the idea of death. But when medicine inures you to the idea of life, to survival, then it has failed utterly. The novelist Thomas Wolfe, recalling a lifelong struggle with illness, wrote in his last letter, ‘I’ve made along voyage and been to a strange country, and I’ve seen the dark man very close.’ I had not made the journey myself, and had only seen the darkness reflected in the eyes of others. But surely, it was the most sublime moment of my clinical life to have watched that voyage in reverse, to encounter men and women returning from that strange country— to see them so very close, clambering back.” (p. 400)

As long as there’s hope…

Most of us are terrified at gut level by the mere mention of the word “cancer”. Many people will hear the diagnosis that they have it, in their lifetimes. It is an ugly disease that kills in ways that are simply obscenely awful. Most people do not want to face death, or cancer. But your one weapon is knowledge. According to Mukherjee, the book was a response to the demand of a patient of his: “I’m willing to go on fighting, but I need to know what it is that I’m battling.” Reading this takes time and time is what you need when you want to become closely acquainted with the Emperor of All Maladies – every day, another chapter, another little bit closer, until you can look this thing in the eye.

Mukherjee has done the world a service by writing this book. I thank him for it. Now you go and read it.

When it comes to cancer, everyone has a story.