The teaser trailer for the new film based on the Mary Poppins books by P.L. Travers was released to coincide with this year’s Academy Awards. It shows Emily Blunt, in the role of “Mary Poppins”, arriving on the tail-end of a kite in the park, where “Michael and Jane Banks” wait anxiously. It also shows Mary Poppins admiring herself in a mirror, as she often does in the books. Like the successful Paddington Bear films (Paddington 2, released on 10 November 2017), and even the latest film version of The Tale of Peter Rabbit by Beatrix Potter (Peter Rabbit, released on 9 February 2018), this film is hotly anticipated. Mary Poppins Returns is only due for initial release in the U.S.A. on December 25, 2018. Until then, the trailer is enough to confirm for me that it is same-old-same-old in this version – with plenty of sugar-coating and not much of the menacing character that Travers created. Menacing? You must be joking, you say. Sorry, I’m not…just read on.

Edwardian tastes do not translate well

I wrote in my critique of Lives of the Monster Dogs, that in all respects the book still works after two decades. The problem with new Mary Poppins film is that the original books don’t. The film’s source material is limited to the original book and its seven sequels. Judged on their own merit, as children’s books with adult appeal, the first one was good – not great, just good – the rest got worse with every publication..boring, more boring, terribly boring, and so on. And this is all that the script-writers had to call on:

As I pointed out in my analysis of the Mary Poppins phenomenon at the time of the release of Saving Mr. Banks (2013), the Mary Poppins books were written and set in the Edwardian Era and reflected a certain method of child-rearing. They also reflected P.L. (Pamela Lyndon) Travers’s traumatized childhood in Australia. The Edwardian tastes and values depicted in the books are not so appealing today.

Baby Boomers (born early to mid 1940s) and Generation Xers (born early to mid 1960s) would know the Paddington, Peter Rabbit and Mary Poppins books – even the Narnia books by C.S. Lewis – from when they were children, and would still feel fondness for them today. This would be particularly due to the sugar-coated 1962 fantasy film version of Mary Poppins, with the impeccable Julie Andrews, the jolly songs, and the animation sequences.

A key feature of the books is the tension and drama created by the threat of abandonment and disapproval by Mary Poppins, the surrogate parent figure to the Banks children. Arms-length child rearing, requiring a nanny, was typical of the Edwardian Period when Travers was a child. But today – how would this tension be sustained in a film? If the producers make Mary Poppins all sweet and kind, then what would the children strive for, what would they fear, and what would they learn from? Even if the 2018 film is still set in about 1910, how would they depict Mary Poppins’s darker side – and would they at all? (In literary terms, would Mary Poppins be the protagonist, or the antagonist?)

When Mary Poppins arrives back in “Cherrytree Lane” in Mary Poppins Comes Back, life is wonderful. When she leaves, it is a tragedy. Her stay in all the books consists of formulaic vignettes where 1) the children are bad, 2) they go on an excursion, 3) Mary Poppins does something miraculous with some new strange person or group, 4) crowds gather and dance, sing, cavort or whatever, 5) they go home, and 6) Mary Poppins denies anything happened. And 7) the children, like in Nanny McPhee, “learned their lesson”.

“’On the end of a string. Like a Monkey or a Spinning-Top? Me, Michael Banks?’ Mary Poppins, in her fury, seemed to have grown twice her usual size. She hovered over him in her night-gown, huge and angry…”(From Mary Poppins Comes Back) 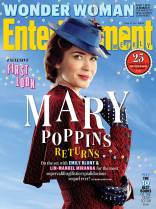 Emily Blunt as “Mary Poppins” on the cover of “Entertainment Magazine”.

Mary Poppins dancing with the sun in the sky – the only one who does not get burned by its brilliance. (From “Mary Poppins Comes Back”, illustration by Mary Shepard)

Mary Poppins and the Banks children looking distinctly like a painting by Sandro Botticelli, “Madonna of the Pomegranate” with Mary at the centre. All she’s missing is a halo. (From “Mary Poppins Comes Back”, illustration by Mary Shepard)

Reading the e-book version meant that I could do a search and compare online using extracts of the text. You’d be surprised how often the same phrases and descriptions of Mary Poppins being furious, glaring, awful and jeering occur in the books.

No matter how mean she is, how withholding of affection, how dishonest and threatening, the children still adore her, as children always do with their parents. Mary Poppins was part of a range of similarly themed popular children’s books, and Travers simply continued with this theme and characterization in all the subsequent books she wrote. However, on rereading all of them now, after many years, I noticed disconcerting things about the Mary Poppins character that I’d never noticed before.

For instance – Mary Poppins being “practically perfect in every way” – in fact, just too perfect. To Travers, her father, an unsuccessful and weak man, was the next thing to the angels, and could do no wrong. She therefore depicts Mary Poppins as a God-like figure and replacement parent – descending from the clouds, waving a hand to perform miracles, able to shift time and space, and make animals, constellations, people and lesser gods bow down before her. I’m not exaggerating – it’s as plain as the nose on your face in all the books. Fans of the books call this “magic”. I call it demonstrations of omnipotence.

I remember the reading of the Heidelberg Catechism in the Dutch Reformed church, which goes: “I, the Lord your God, am a jealous God, punishing the children for the sin of the parents to the third and fourth generation of those who hate me…” As I child I always thought it was pretty scary. This is what Travers’ Mary Poppins creation is like, once you look past the superficial, saccharine associations; powerful, jealous, punishing, scornful, and only merciful if you obey her.

“Mary Poppins seemed hardly able to repeat the dreadful statement. She glared at Michael. ‘Now this——’ she began, and he shrank back in terror from her wild darting eyes. ‘This is the Last Straw. First you are impudent to me and then you insult my relations. It would take very little more—Very Little More—to make me give my notice.’” (From Mary Poppins Comes Back)

Specifically in Mary Poppins Comes Back, the sun and the stars adore her and she is able to bring about the changing of the seasons in the park. Even “Nellie-Rubina Noa” on her ark, who “may be the daughter of God” according to some analysts, or the wife of the Biblical Noah, kowtows to her. This event, and most of the characters in the Mary Poppins books, come from Travers’ memories of her childhood. (Valerie Lawson offers a very good analysis in Mary Poppins, She Wrote: The Life of P. L. Travers, Simon & Schuster, 2013.)

How the film makers would tackle this conundrum, this complex and somewhat unpleasant character, I have no idea, but I expect they will choose the pleasant angles rather than the petrifying ones. Certainly Emily Blunt has her work cut out for her.

Is this a good idea?

My question is – do we need another Mary Poppins film? Do we need more non-critical, fawning rehashes of the same old stuff that was never that good in the first place? There are a gazillion other children’s books to film, superb books that mean something to today’s kids (and even some that have aged well). Come on, Hollywood, it’s time to let go of your fixation with vintage British children’s books. I know the expiration of copyright has a lot to do with whether or not a film can be made, but surely there are talented writers out there just dying to get their current ideas on film, copyright be damned.