Jo Nesbo is a masterful writer of crime fiction. In his particular niche, he is superb. That said, it probably takes his level of expertise and confidence to take on William Shakespeare and write a modern interpretation of Shakespeare’s 1606 play, The Tragedy of Macbeth. It is probably best if you read Nesbo’s Macbeth without ever having read the play, because if you have, you will spend ages in a kind of suspended animation, pausing to compare the book to the play. I sometimes did not know whether I wanted to continue reading since I realized that Nesbo had kept pretty close to the details of the play, and I knew how the play ends. So it is best that you ignore Shakespeare’s Macbeth, and tackle this exactly like you would normally approach a Nesbo novel – gleefully anticipating murder, gore, and bastards with blood on their hands.

Anyone who has studied English literature will know quotes from the play (“Out, damned spot! Out, I say!”, or “Double, double toil and trouble”, etc.), and snatches of Elizabethan English, and will inevitably find equivalents in the book. I don’t know if Nesbo did it by accident, having had the original play on his mind, or whether he or the translator peppered the text with those anachronisms on purpose.

You get the idea. “All hail”, for instance, was popular right up to the 1800s, when it peaked, but by 2000 the expression was hardly used at all. Those words and forms of expression are Elizabethan, not from the 1970s. Either way, every time I got to one it seemed intrusive, since the novel is set 25 years after the Hiroshima atom bomb was dropped, in other words, 1970, in a nameless town in Scotland.

“Twenty-five years ago an American president dropped the atom bomb on two Japanese towns populated by children, civilians and innocents. It stopped a war. That’s the kind of paradox God torments us with.” (p.246)

The setting supports the time period, with references to Fife and Inverness in Scotland and consumer goods of the time, such as record players. But would a modern-day Scottish police officer, particularly one as mentally twisted and high on drugs as Macbeth, use the words “populated by” – one of the many times he uses long, formal terms? I wonder.

Daggers and blood and interesting ways to die

There are more anachronisms like the language though. There’s an awful lot of daggers being used. I did not think that daggers were still a thing in 1970. But daggers are very Elizabethan. At one point, “Macbeth’s” enemies are obliterated by the use of Gatling guns. A Gatling gun is a pre-WWI gun of which all models were declared obsolete by the U.S. military in 1911, after 45 years of service. Also, Macbeth wants to pay off a co-conspirator with a briefcase full of gold bars.

The puzzling case of the gold bars

People on the Internet have asked the same question that I have had – which is, how many gold bars can you get into a briefcase? It’s a personal bugbear that I have – people who don’t have anything to do with Mining always get the thing about gold bars wrong. 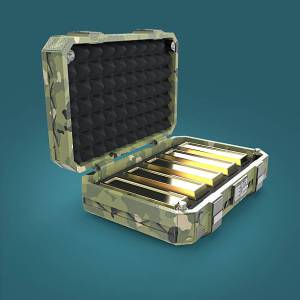 So here it is:

Macbeth promises his enemy a big payoff but replaces the gold bars with gold-plated iron, a fraction of the weight, and a large bomb. That explains how he can run up and down stairs with the briefcase in his hand. However, it points to a certain carelessness by Nesbo – people who look only a little bit deeper know how heavy gold is, and the “Can You Lift a Gold Bar With One Hand? Challenge” is so pervasive, it’s almost a joke. (The answer is, probably not.) Why would you even think of using such an old idea in your novel? The last author I read who used this silliness was Ian Fleming in Goldfinger.

The same, yet different

Adaptations of Shakespeare’s plays, particularly Macbeth, in different media – from films to symphonies – are fairly common. So the novelization and modernization are not unusual. It is after all a very dramatic play. In its time it was the equivalent of a populist action drama: short, inflammatory and violent. Just the kind of incendiary stuff, critical of the ruling royals, that the audiences of the time would’ve enjoyed.

“Macbeth” is a 2006 Australian adaptation of William Shakespeare’s “Macbeth”, directed by Geoffrey Wright, starring Sam Worthington in the title role. The play was changed to a modern-day Melbourne gangster setting, and is extremely violent, thought it largely maintains the language of the original play.

Other than the references, the settings and language I’ve already mentioned, what remains is very like the original Macbeth – the horrible weather, the politics, the motivations, the relationships between the characters, the state of war, the absolutely mental bastards (practically the whole police force) and of course, their names:

Sometimes, the writing is uncannily similar. Take this moment between Macbeth and his wife’s doctor, after Lady Macbeth/Lady has had one of her episodes:

Where’s the kick in it?

What makes the novel worth reading then, apart from the plot, which is an adaptation of the classic plot of a tragedy, and the consequences of the disintegration of moral order, and the fatal effects of a lust for power?

Comparisons are odious, as the expression goes. But merely by using the title Macbeth, Nesbo set himself up for inevitable comparisons by readers.

Where he gains a bit on Shakespeare is in his use of the form and in his characterizations. Firstly, as opposed to a play, which is limited in the extent to which characters can be built up, Nesbo fully describes and animates each character in the book. It is a cast of characters, but they are, individually, quite interesting and their actions are convincingly motivated. Also, the deaths are pretty grisly, with lots of detail of where the holes are (!) and what the rats are feasting on (!!) and how the blood pools. Nesbo is very good with blood.

“Lennox didn’t answer. He was studying the growing pool of blood seeping out of the young man’s body toward him. There was something strangely beautiful about the shapes and colors, the sparkling red, the way it extended in all directions, like red balloons.” (p.340)

The translation of the moral dilemmas, from kingship in ancient Scotland, to political and legislative power in industrialized Scotland, is also interesting. The morals and values are current and will resonate with many readers. The round-and-round-and-round arguments about who should kill who and why, are like rather gruesome chess games. The morals and thinking of the characters have a common theme – their need for and use of very bad drugs.

Nesbo’s language, in this novel, is less business-like than in his other books, simply because he has more room for manoeuvre – it is quite long at 446 pages. He introduces the first scene in quite a creative way, following, as an omnipresent third-person observer, a drop of rain making its way into the miserable town. The image of the drop of rain falling on people at various times is repeated – the town always seems to be unhealthily foggy, smoggy, filthy, wet and cold. He also excels in the descriptions of the misery of the place.

But, does it work? Should you read it to better understand Shakespeare’s famous but depressing play? Should you read it just as it stands, as a crime novel? Like I mentioned at the start, it would be better to read if you know nothing of the play and have no quotes in your mind. Then it would be the excellent, thrilling and very dark Nesbo in full swing. And it is most certainly Nesbo’s homage to Shakespeare.

I suppose that Nesbo, at this time in his career, has had so many best-sellers that he can afford to experiment with his writing. I would still like to know why, though. Why Macbeth, why now? Is the novel a metaphor for something in the world today? (It is set in Scotland, not Norway, Nesbo’s home, so it may not be a critique of something happening now in Norway.) As usual, I will not be searching the Internet for answers. The text, after all, should stand on its own merit.

Does it end the way the play does, given that many of the characters live or die like in the play? That’s for you to find out. I will not spoil the ending. But in this case, it’s more around the process of reading to get to the ending, than about the ending itself. And it is a cleverly thought-out process. Go on, read it, it’s a win-win; it will be good for you to get (re)acquainted with Will Shakespeare, and Nesbo is, yet again, masterful.

Header image: By Ivandrei Pretorius; Pexels.com ✓ Free for personal and commercial use ✓ No attribution required