The Heart Goes Last held no surprises for me. Dystopia set somewhere in the future? Check. All doomed to implode due to typical human weaknesses? Check. Clever advertising references and initially interesting, futuristic products? Check. Ordinary people up against the machines, that brings out the worst in them? Ditto. People stuck in a type of bubble or petri dish situation, every move recorded by Big Brother? Ditto again. Atwood’s latest vision of the future has been overtaken somewhat by developments in technology and many individual aspects have already been depicted in earlier novels and films. However, all the combined features of the dystopian world she has created make for an entertaining creation. I can definitely see this book being filmed, scene by scene. Atwood introduces the gated community, “Consilience”, and the associated prison, “Positron”, which are combined into a massive social experiment and into which a down-and-out couple wins access. This man-made, ostensibly pastoral “enclosed world” brings to mind WestWorld (the 1973 film and 2016 HBO series), and The Truman Show (1998). It’s definitely been done, and with more panache, but there are a few clever ideas in the novel too, like those creepy, blue, knitted teddy-bears. Other familiar sci-fi “tropes” in the novel include: 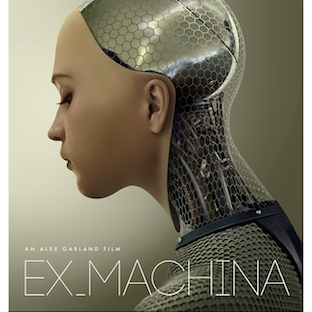 Poster from the film Ex Machina. The sexbot in the film is not “Ava”, played by Alicia Vikander, whose image is on the poster, but “Kyoko”, played by Sonoya Mizuno.

Quote from the film, Ex Machina.

The original Westworld film poster from 1973.

Poster from the WestWorld TV series of 2016. 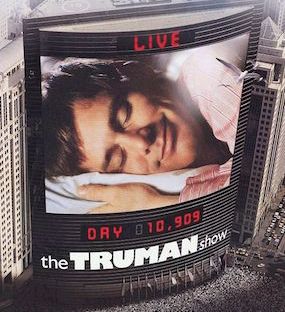 The Truman Show – no-one likes being in a petri dish.

In Soylent Green people were recycled for food.

“Saya” was drawn, not born.

“Kirobo” will keep you company and read your emotions.

Atwood is a polished writer, so it is an undemanding read, quite enjoyable. The book’s title comes from one particularly well-written section, where the sexy but naive heroine, “Charmaine”, has to put an offender to sleep, permanently.

“Off we go,” she says cheerfully. She finds the vein, slips in the needle. Uhuhuh, he says. He strains upward. His eyes are horrified, but not for long. His face relaxes; he turns his gaze from her to the ceiling, the white blank ceiling, which is no longer white and blank for him. He smiles. She times the procedure: five minutes of ecstasy. It’s more than a lot of people get in their whole lifetimes. Then he’s unconscious. Then he stops breathing. The heart goes last.” (p.86)

The novel proceeds along a fairly predictable plot line, and the reader, right from page 1, asks rhetorically; What could possibly go wrong? Judging by every other dystopian novel, everything, humans being naturally inclined to nastiness. Ultimately, Charmaine and her pretty average husband, “Stan”, find out the horrible truth, escape and go public with their story. Afterwards, Charmaine believes that, before she got away, she received a brain adjustment procedure designed to make her fixate on the first person she saw when coming to. She saw Stan, and feels like she has no choice but to love him. So she does. Later she gets asked if she wants to know the truth.

Charmaine finds out that she did not have the procedure and cannot believe that she was not coerced to love Stan, and is distraught that her life is now unsettled.

“You prefer compulsion? Gun to the head, so to speak?” says Jocelyn, smiling. “You want your decisions taken away from you so you won’t be responsible for your own actions? That can be seductive, you know.” (p.379)

What Charmaine decides, you will have to find out for yourself. There is not that much else to anticipate or wonder about in the novel, and this existentialist question comes right at the end after a long schlepp through many pages.

The point Atwood makes with this is that the people who chose the easier, safer, life inside Consilience, also had their minds made up for them and their choices taken away, like Charmaine thought she had, and this was ultimately what made them rebel against the system. All the luxury, security, pleasure, and even love in the world is no good for the people who were once so grateful to get into the closed community, because they did not choose it for themselves. They were not free to accept or reject anything. And that included the freedom to love and be good, and the freedom to act like complete perverts and to abuse their power. They’d kill to escape from their perfect world and their “humane” prison.

In WestWorld, sentience or self-awareness of the robots leads to problems. Sentience in the inhabitants of Consilience/Positron was taken for granted, since they might have been damaged goods, but they were not robots. Yet, it took the humans the loss of their freedom to understand, gradually, what it means to them and to make them conscious of their true natures and desires. Charmaine’s greatest horror was not that she would lose Stan, but that she would be replaced by a lookalike sexbot. Not a bad theme, fate and free will, but just too easy for any novel in the dystopia genre.

Read more about Margaret Atwood and the MaddAdam Trilogy here.