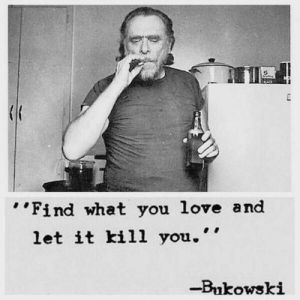 In Charles Bukowski’s famous novel, Hollywood, one of his many famous cult classics, his alter-ego “Henry Chinaski” describes actors as follows:

“I just decided that actors were different than we were. They had their own reasons for things. You know, when you spend many hours, many years pretending to be a person who you aren’t, well, that can do something to you. It’s hard enough just trying to be yourself. Think of trying very hard to be somebody you’re not. And then being somebody else that you’re not. And then somebody else. At first, you know, it could be exciting. But after a while, after being dozens of other people, maybe it would be hard to remember who you were yourself, especially if you had to make up your own lines.” (p. 210)

Being creative really takes it out of you

Bukowski expressed himself through the down-and-out character he created, “Henry Chinaski”, who features in many of his novels about people on skid row. But as an author who worked in Hollywood, he would have known about the strangeness of being an actor, and the strangeness of being a writer. “Trying to be someone else” for extended periods would be extremely difficult. And might even make you ill or drive you to drink. Or vice versa?

I suspect that I find this subject so interesting because I am one of those stone-cold sober types who has never used drugs, will never use drugs, and rarely drinks alcohol. I have two vices – coffee and chocolate, and that’s about it. It is very hard for me to relate to such characters and when a writer is particularly talented and I am carried along to relive the characters’ deliriums and hallucinations through the author’s words, I often find it quite unpleasant and upsetting. (Educational, but nasty.)

When I see or read a particularly convincing character or description, I wonder what was it in the creator that allowed them to produce this so convincingly? HOW do they do it – and do it for so long? Hoe did the creative process affect them?

Let’s say the author has written an enthralling description – in emotions, actions, thoughts and motivations – of a drug user. What is the link between drug use and the author? To which extent is the author like their creation? There is a constant push-pull in novels of “authorial presence” – how much of the author personally is in the novel. Is it their words, their ideas, and their take on a subject on the page? Or are they mere skilled interpreters, observers, researchers and imitators? How hard is it to take on the character? The degree to which authors reveal themselves in their novels is on a sliding scale of complete authorial presence, or none.

Truth and lies in novels

The problem with “pretending” is that readers, if they have themselves been in the trouble that the characters are in, will recognize whether the descriptions are true to life or not. (As in Anthony Bourdain recognizing that James Frey’s descriptions of his addiction and recovery are fake.) And if they’re fake, it’s no crime – it’s fiction after all – but the book will not go down as well.

A case in point

There has been a huge uproar about feminism and the depiction of modern Chinese women in the work of contemporary Chinese writer, ZHOU Wei Hui (known as Wei Hui or Weihui in the West). Born 1973, her novel Shanghai Baby (1999) was banned in the People’s Republic of China as “decadent”. In the West, the reaction was mostly positive and the book was translated into English and other languages, and filmed in 2007. Her latest novel, Marrying Buddha (2005) was censored, modified and published in China under a different title.

Wei Hui claims that her writing is semi-autobiographical, especially Shanghai Baby (Shanghai baobei) which features young, modern characters and a lot of sex, drugs, drinking, materialism, and scantily-clad young women with a lack of old-fashioned Chinese morals (called “Hooligan Literature”). It depicts a lifestyle that is unthinkable in polite Chinese society. So, she says she has to immerse herself in the world of her characters, “like a fish into the sea”, and has also relocated from Shanghai to New York. There seems to be a great deal of confusion about exactly how much of herself Wei Hui and her contemporaries, like Mian Mian (born WANG Shen) and WANG Shuo, put into their writing, and while readers and promoters like to think there is a lot of authorial presence, it may all just be a marketing ploy:

“Despite being uncomfortable with her country’s headlong dash for riches – its corruptions, ruthlessness and materialism – she herself is a devoted materialist. (Gu Xiao Jia, 2007).”

Part of the success of Wei Hui’s books has been the belief of her readers that she has personally experienced the drug use, alcoholic stupors and rampant sex-life of her characters. If readers who enjoy this particular salacious angle find out that the author has NOT written from personal experience, then the author’s credentials are questioned, as hers have been, as if they faked their qualifications.

Really disreputable or off their heads

This conundrum gets deep when the authors actually are demonstrably as disreputable in their own lives as the characters they put into their books – or when they share the same addictions and mental illnesses.

It is easier to depict what you already feel and have experienced (for instance when Charles Bukowski, a known alcoholic, writes about “Hank Chinaski”, another alcoholic character) than to depict something alien to you (for instance, Jo Nesbo, a former economist, and surely no madman, writing about psychopathic killers). For a start, the latter requires a great deal  more research.

This is the first of a series of five “long reads”. The complete series is: